It looks 99 percent ready for production.

The production version of the Porsche Mission E Cross Turismo is just around the corner - the German automaker is expected to launch the so-called Taycan Cross Turismo before the year’s end. We have a fresh new batch of spy photos with the model, showing it’s almost ready to be released.

Everything from the shape of the body to the headlights and taillights on this prototype seems to be in its final form. Porsche is not even bothering putting heavy concealment and is just trying to hide the exact shape of the taillights with some red tape.

As we’ve already seen in previous spy photos with the all-electric estate, it will remain very close to the concept car from 2018 with the only little exceptions being the wheel designs, exterior colours, and a few little decorative elements. That’s good news since the Mission E Cross Turismo looks quite nice.

Aside from the sexy long-roof body, the Cross Turismo will pretty much be the same car as the regular Taycan when it comes to its powertrains. That means we should get Taycan 4S, Taycan Turbo, and Taycan Turbo S trims with an output between 530 bhp (395 kilowatts) and 761 bhp (567 kW). All three should have an all-wheel drive as standard equipment and should offer a blistering acceleration. 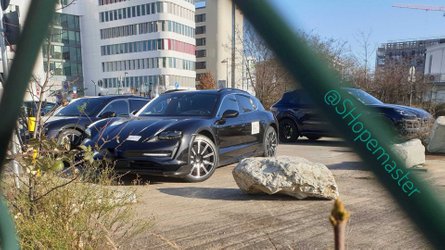 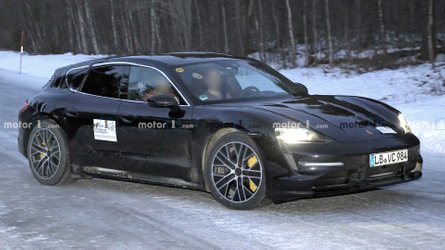 Porsche Taycan Cross Turismo sheds camo in spy shots, or does it? 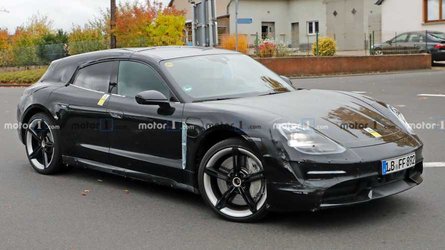 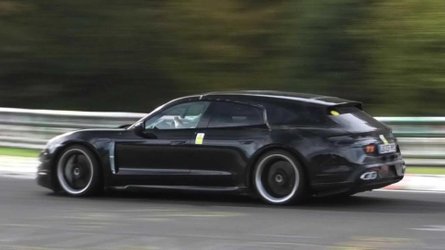 It was initially believed that the Taycan Cross Turismo would debut in March year with a public premiere at the 2020 Geneva Motor Show. That wasn’t the case, obviously, and Porsche’s Annual and Sustainability Report 2019 confirmed it is coming later in 2020. Additional derivatives could also be in the cards.