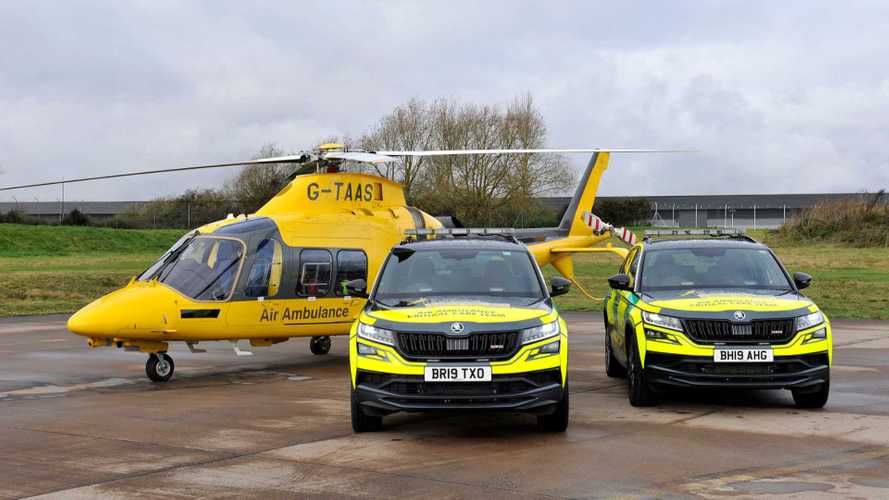 It's the latest role for Skoda's potent family 4x4.

An air ambulance service in the Midlands has enlisted some help in the form of two Skoda Kodiaq vRS 4x4s. The Warwickshire and Northamptonshire, Derbyshire, Leicestershire and Rutland Air Ambulance service, which operates across those counties, is using the versatile vehicles as ground support for its helicopters, staff and crews.

Because the air ambulance service’s helicopters do not fly during the hours of darkness, the charity uses road vehicles to respond to emergencies. Over the first three months of 2020 alone, the organisation has undertaken more than 600 combined missions and covered around 10,000 miles on the road.

As a result, the charity required a vehicle that could access remote locations, as well as offering enough space to carry the life-saving equipment the first responders might need. The Kodiaq vRS, which combines a 236 bhp 2-litre diesel engine with four-wheel drive, was deemed to fit the bill.

Both cars were tailored to the air ambulance service’s demands, with specialist work carried out by Skoda-approved converter Halls Electrical Limited. And the two Kodiaq vRS models should fit right in, as they are joining a fleet that already contains two Skoda Superbs, which help the emergency teams operate 24 hours a day, 365 days a year.

“It is more imperative than ever that our fleet of critical care cars are able to meet the demands of the job,” said the Warwickshire and Northamptonshire, Derbyshire, Leicestershire and Rutland Air Ambulance Service’s director of operations, Richard Clayton. “The reliability, versatility and power of the two new Kodiaq vRS models will enable us to continue to respond rapidly to emergencies across the Midlands.”

It’s yet another emergency use Skoda has found for the Kodiaq, which was recently offered to police forces in dog unit guise, after also having been converted to an ambulance. And in go-faster vRS guise, the car has even been converted into an all-terrain police pursuit vehicle.

Skoda is making a habit of such conversions, having made ‘blue-light’ modifications to cars including the Fabia, Scala (above) and Karoq. But perhaps the most commonly sighted vehicle to hit UK roads with blue lights on the roof is the Octavia used as a paramedic first response vehicle.

Skoda says it offers these bespoke conversions for emergency service fleets through its ‘one-stop’ package. The company can provide the vehicles fully converted to the organisation’s needs with finance solutions included, alongside conversion, breakdown recovery, servicing and maintenance packages that are built into the deal.