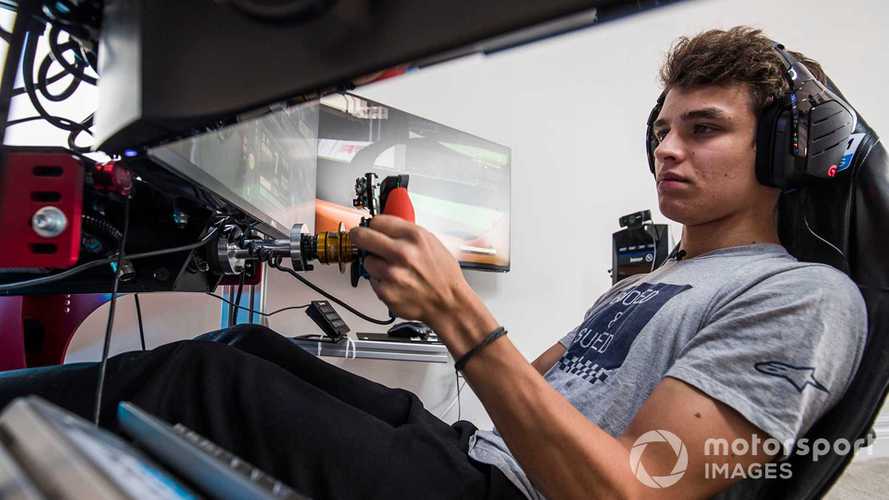 The Pro Series features a multitude of real-life racing drivers racing alongside the best sim racers and content creators across two races on simulation-focussed title iRacing. Norris took pole position for the first 25-minute race at Silverstone by well over half a second and controlled the race thereafter.

He was able to immediately build a sizeable race lead while the cars behind frantically jostled for position.

“The guys behind battled a lot, that made my life a lot easier,” Norris said after the race. “It was quite straight forward because I didn’t have to fight anybody.”

Norris crossed the line 10.935 seconds ahead of his nearest competition, which was 2019 World’s Fastest Gamer winner James Baldwin.

IndyCar racer Ed Jones was running in a strong second position but disconnected from the race due to internet issues. This promoted Baldwin into second place, who had just overtaken 2019 Japanese Formula 3 champion Sacha Fenestraz into The Loop on the previous lap.

Mercedes Formula E star Stoffel Vandoorne dropped out of the top 10 after a frustrating battle with the lapped Euroformula Open driver Niclas Krutten, who was attempting to unlap himself but cost Vandoorne significant time.

The reverse-grid race was dominated by Kodric who escaped down the road in a similar fashion to Norris in the opening race. Norris survived opening lap contact on the way into Village with Baldwin and Vandoorne, who were both sent spinning.

Norris managed to climb from P10 to P2, cutting his way through the field. He passed his former European Formula 3 teammate and roommate Fenestraz for second into Stowe corner with just five minutes to go.

Deletraz took another fourth-place finish ahead of Bolukbasi and current Formula E points leader Antonio Felix da Costa, who charged from 22nd on the grid to finish in sixth place.

Veloce’s #NotTheGP series will return next weekend in place of the postponed Vietnam Grand Prix. That race will be available to watch on Motorsport.com and Motorsport.tv.