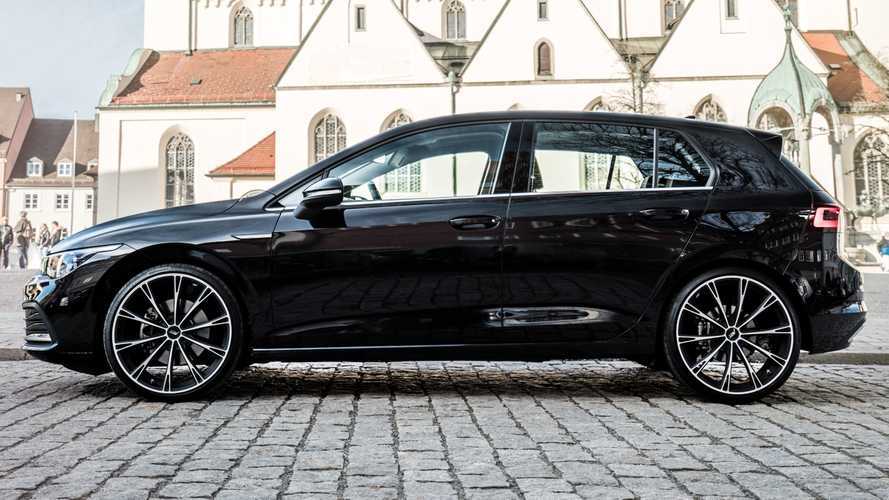 ABT is among the first tuners to get its hands on the shiny new Golf.

With customer deliveries of the eighth-generation Volkswagen Golf underway, it doesn’t come as a big surprise the aftermarket scene has taken notice of Wolfsburg’s shiny new compact hatchback. ABT is among the first tuners to take a stab at modifying the Mk8, starting off with a minor customisation for a well-equipped First Edition example finished in black.

Gone are the stock wheels as the German tuner based in Kempten has swapped them out to make room for its own 20-inch set with a two-tone, double-spoke design that suits the Golf 8 quite nicely. The new shoes are wrapped around in 235/20 R20 Continental tyres and are complemented by suspension lowering springs. These reduce the ride height between 25 and 30 millimetres (1 to 1.2 inches) to not only make the car look arguably better, but also improve handling a little bit. ABT mentions the new hardware is compatible with the vehicles equipped with VW’s optional dynamic chassis control (DCC).

The tuner is also offering smaller 18- and 19-inch sets of alloys for the latest and greatest Golf and promises to have engine upgrades for both petrol and diesel fans available by summer. ABT has been working on VW’s best-selling car ever since the Mk1 and the aftermarket specialists even teamed up with the automaker for a 360-bhp Golf R special edition launched in Switzerland back in 2016.

Other Golf projects by ABT worth noting include a 400-hp Golf R unveiled in October 2017 and a 335-bhp tune for the Golf GTI TCR introduced last summer. You can rest assured the tuner will get its hands on the new GTI and R sooner or later, and maybe on the GTD as well to cater to the diesel-loving Euro crowd in need of more oomph.

Get up to speed with ABT:

ABT tries to make the VW Transporter more aerodynamic

Beyond the Golf, it’s pretty obvious ABT has a soft spot in general for VAG products. They can tune just about everything the German automotive conglomerate releases, building a one-off 400-bhp A1 Sportback or a Touareg V8 Diesel with mountain-moving torque. But the car we’re mostly excited to see is the Audi RS6-R debuting later this year.