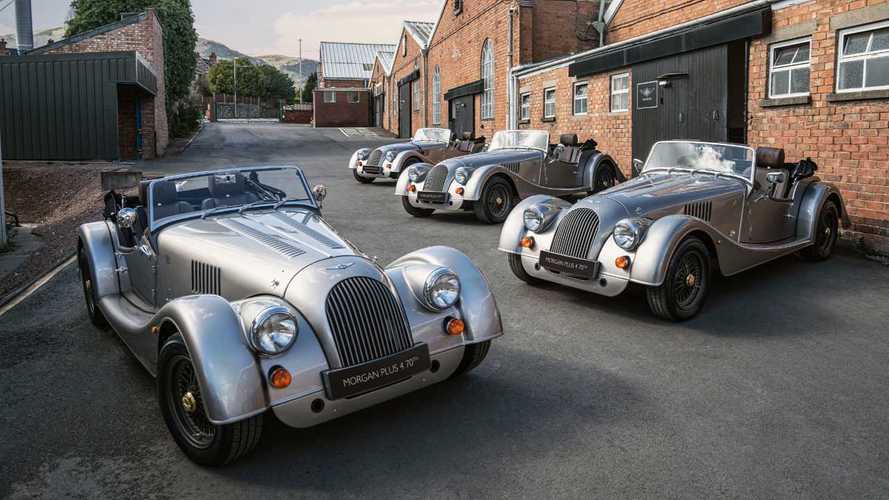 The limited-edition cars celebrate 70 years of the quintessentially British Morgan Plus 4.

The first examples of Morgan’s new Plus 4 70th Anniversary Edition have rolled out of the company’s factory in Malvern. The cars are among the last steel-chassis Morgans to be built at the historic Pickersleigh Road plant - once the last of these cars leave, the company will fully transition to aluminium chassis construction.

Until that point, though, the 20 70th Anniversary Edition cars will be marked out by their unique specifications. The bodywork is coated in Platinum Metallic paint to celebrate the model’s milestone birthday, while that is complemented by the satin dark grey wire wheels. There’s also a motorsport-inspired front valance and exterior black pack including a black stone guard, black A-pillars and black sidescreens.

And to top it off, each car comes with an engine map configured by Aero Racing, Morgan’s in-house motorsport specialists. That increases power from 154 bhp in the standard car to 180 bhp for the special edition, cutting the 0-60 mph time to less than seven seconds in the process. And to provide a soundtrack that matches the speed, all the cars are fitted with an Aero Racing sports exhaust, finished with a ceramic-black tail pipe.

Each of the cars comes with a £60,995 asking price, but deposits have been taken on all 20 examples. The completion and distribution of the first cars came just before the company elected to close its factory to combat the spread of the coronavirus, but the rest of the vehicles will have to wait until the factory reopens. At present, the plan is to close down for a month from March 25.

“It has been fantastic to witness the first Plus 4 70th Anniversary models complete production,” said Morgan’s chairman and CEO, Steve Morris. “They represent the last steel chassis models, and we are delighted to be able to celebrate such a significant milestone in this way. It’s a poignant moment as the first CX-Generation Plus Four models are built alongside the final steel-chassis Plus 4 models. We feel that both models represent the true qualities of a Morgan sports car.”

“As the design team creating the Plus 4 70th Anniversary Edition, our aim was to create a classic look, yet one that exudes the significance of what it represents,” he said. “A mix of premium tones, high-quality materials, and exquisite details reflect the essence of the venerable Morgan Plus 4, and provide a fitting tribute to the steel chassis that has formed its backbone since it was launched in 1950.”