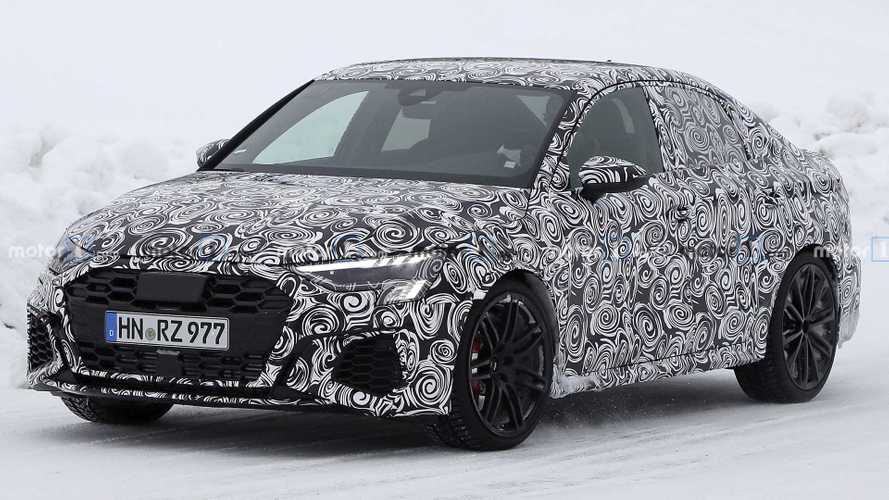 The prototype appeared to have nearly all of the production bits.

We’ve seen our fair share of the Audi RS3 Sportback, but this is our first look at the saloon set to rival the Mercedes-AMG CLA 45. Even though we haven’t shared any spy shots of the RS3 Saloon so far, it appears this prototype caught cold weather testing in Sweden already has most of the production bits and pieces in place.

From the large air intakes up front to the oval exhaust tips at the back, there are plenty of signs this is a big step up from a regular A3 Saloon.

The test vehicle Audi was evaluating in northern Europe was wearing a lot of camouflage, but that can’t stop us from noticing the bulging fender wings and the subtle boot lid spoiler. A closer look at the front axle reveals drilled rotors and red brake calipers, while the black alloy wheels with winter tyres will be replaced by a larger set with wider rubber on the production car.

By the looks of it, the RS3 Saloon prototype had nearly all of the production bodywork, along with the final headlights and taillights. Underneath the bonnet was without a shadow of a doubt Audi’s reputable inline-five turbocharged engine, which will probably deliver 394 bhp (294 kilowatts) and 354 pound-feet (480 Newton-metres) of torque to match the RS Q3 and RS Q3 Sportback. All that power coming from the 2.5-litre unit will be channelled exclusively to the Quattro all-wheel-drive system through a seven-speed automatic transmission.

German magazine Auto Motor und Sport is spreading rumours about a hotter RS3 Performance variant with as much as 444 bhp, but nothing is official at this point. It’s not completely out of the question seeing as how Mercedes-AMG has managed to extract a whopping 416 bhp from a smaller 2.0-litre turbo powering the CLA 45 S, among other high-performance compact cars.

While it’s too soon to talk about the car’s performances, we can estimate its acceleration figure by looking at the RS Q3 and RS Q3 Sportback. The speedy crossovers need four and a half seconds to complete the 0-62 mph (0-100 km/h) sprint, but the RS3 models should be a tad quicker thanks to a slightly lower weight. Top speed should mirror the velocity achieved by high-riding models, so expect an electronically governed 155 mph (250 km/h) and an optional 174 mph (280 km/h).

Don’t count on seeing the RS3 in either Sportback or Saloon flavours anytime soon as the first order of business for Audi Sport is to introduce the new 306-bhp S3 it previewed earlier this year. The Ingolstadt-based marque has also yet to reveal the regular A3 Saloon, but that will happen in the months to come.