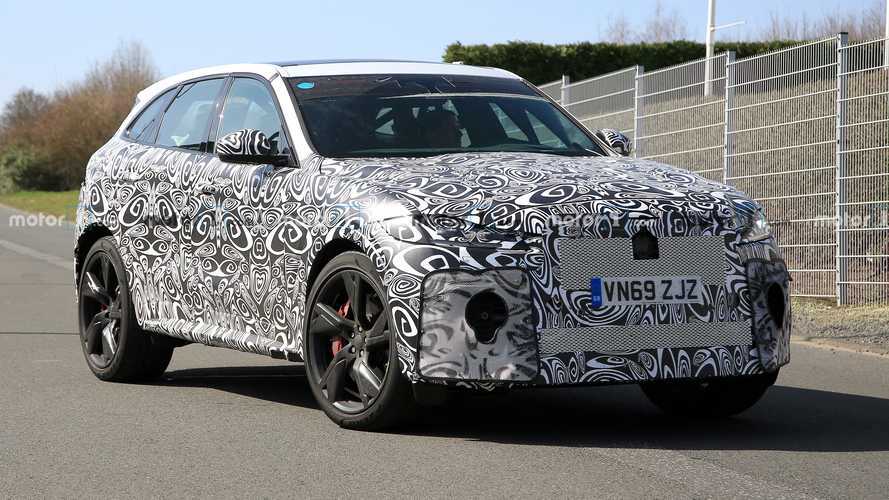 A mild exterior refresh should complement an updated tech-heavy interior.

Automotive production might be slowed or even halted as the world deals with Coronavirus, but prototype testing continues. A batch of spy shots at the Nürburgring show Jaguar thrashing its updated F-Pace around the Green Hell’s many corners.

It’s not any old F-Pace either – it appears to be the hot SVR. There’s no missing the quad exhaust outlets at the rear, not to mention the aggressive bodywork we can suss out beneath the camouflage wrap.

The front fascia is still well concealed behind panels, but we expect the large, chiselled chin of the current model to live on. It’s unclear if those massive corner vents will change shape, but we suspect the grille might be a bit larger since that’s the current trend among most automakers. Minor changes should befall the headlights as well, though based on these new shots the change should be quite minimal overall.

The SVR’s profile looks virtually unchanged despite the camo wrap, with the large vertical wing vents still clearly visible on the sides. At the rear, changes could be more pronounced with a fascia that minimises the pronounced vertical openings at the edges. New taillights are likely part of the package as well, but the overall take is that the facelift should be fairly quiet on the outside.

Inside is still a mystery, as we haven’t had a very good look at what’s in store. Inside sources tell us the greenhouse will get a rather significant update that includes a new digital instrument cluster. The dash should be tweaked to make it fit, and a larger infotainment screen is a likely bet. More technology with over-the-air updates should be available too. As for power, we expect the current supercharged 5.0-litre V8 to carry over, still producing 550 bhp (410 kilowatts) and 502 pound-feet (680 Newton-metres) of twist.

The rumour mill has been rather silent on a debut for the refreshed F-Pace. The SVR should be a 2021 model, but it’s unclear if we’ll see it revealed this year or early next year.