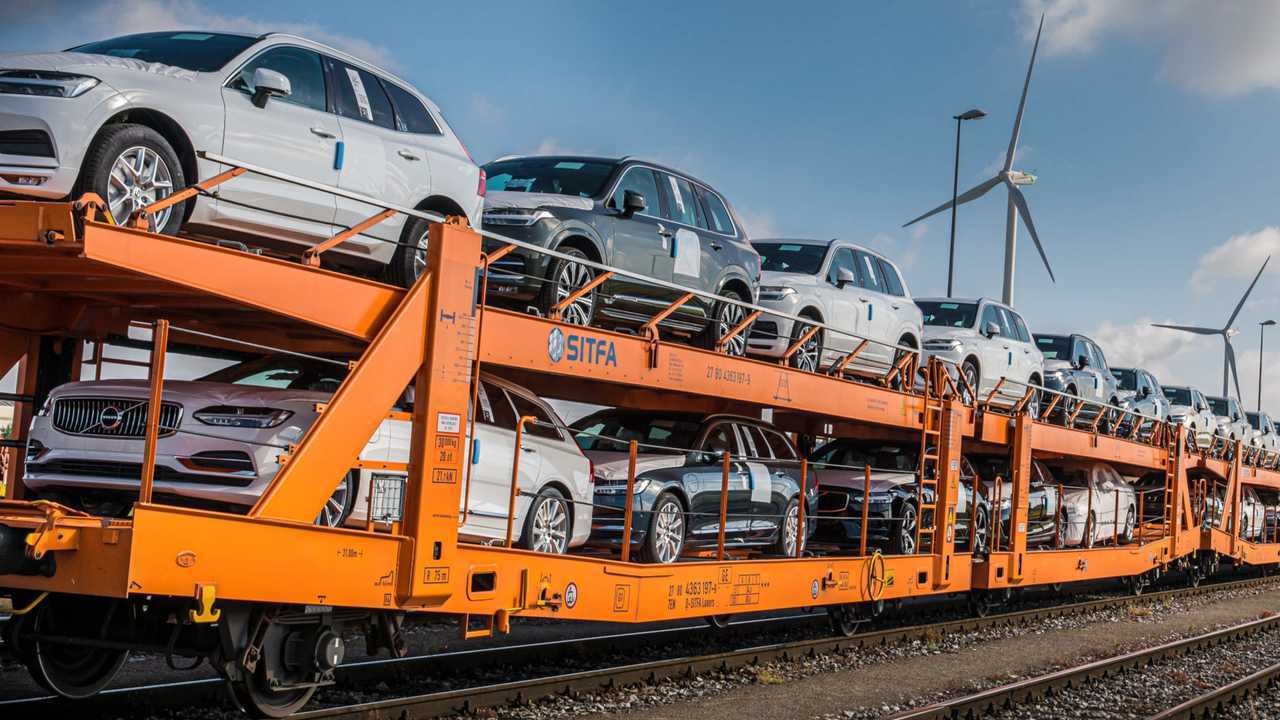 The company is using trains for its logistics operations in a move designed to cut emissions.

Volvo has decided to cut its carbon dioxide emissions not by modifying its cars, but by changing its logistics operation. The Swedish company has confirmed its intentions to switch transport between its factories and car depots from trucks to trains.

The move is part of the firm’s climate action plan, which was revealed earlier this year. The car maker wants to cut its “lifecycle” carbon footprint by 40 percent per car between 2018 and 2025. By 2050, meanwhile, Volvo plans to be “climate-neutral”.

For now, though, the firm is concentrating on its 2025 target, which it says will require a 25-percent drop in its “operational” emissions, including factory emissions and the CO2 produced by transporting its vehicles to markets across the globe. That’s where the move from trucks to trains comes in.

It’s a move that’s focussed on Europe, where truck transport is common and Volvo has a number of factories. The company says implementing rail transport between its factory in Ghent, Belgium, and a purpose-built depot in northern Italy has cut CO2 emissions for that route by almost 75 percent. Similarly, another route between Ghent and a depot in Austria saw emissions fall by almost half when the company switched from road to rail.

But Volvo is not just hoping to use rail transport in Europe. The company is looking at ways of implementing railways more frequently in China and the USA, with cars already transported from factories in China to the port of Ghent by train twice a week. And Volvo has implemented train connections to deliver new cars to other depots in China and Russia.

Across the pond, meanwhile, the company’s base in Charleston, South Carolina, has linked itself into a cargo network that takes cars to depots across North America. Volvo says the train transporters are already replacing the equivalent of “dozens” of trucks a week, and that number is set to increase when the next-generation XC90 SUV goes into production.

“When we said we planned to significantly reduce emissions across all our operations, we meant it,” said Javier Varela, senior vice president of manufacturing and logistics at Volvo Cars. “Our logistics network is just one piece of that puzzle, but an important one nevertheless. This is one example of our commitment to reducing our impact on the environment through meaningful, concrete steps.”

The switch to train transport comes shortly after Volvo announced its first electric car, the XC40 Recharge (above). The battery-powered model, which can manage around 249 miles on a single charge, joins a fleet of plug-in hybrid Volvo models, including the XC60, XC90 and S90.