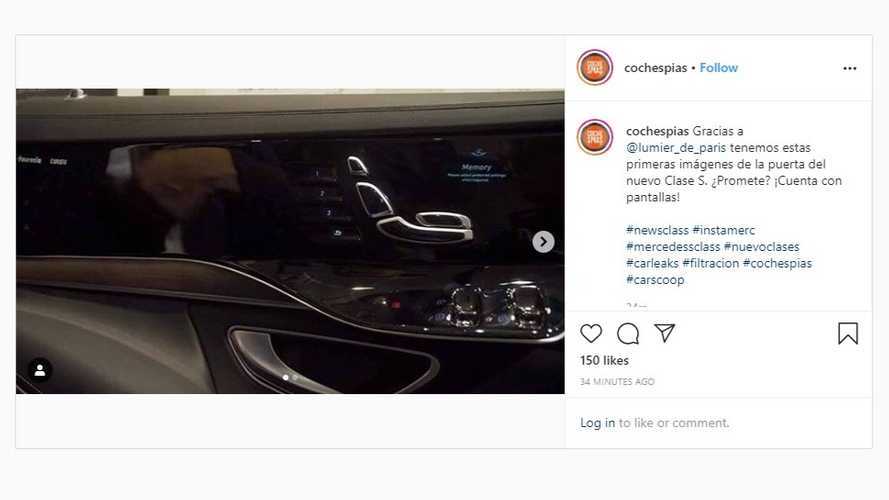 It would seem Mercedes has found a way to add more screens inside its flagship car. Or has it?

[UPDATE] Upon further investigation, we've discovered the image actually shows a door concept developed by Canatu and Faurecia for Daimler to highlight touch-sensitive controls. Attached below is a video showing the demonstrator. Whether the technology will find its way inside the next S-Class remains to be seen.

Instagram is proving to be once again a valuable source for discovering some of the secrets Mercedes is hiding about the next-generation S-Class, provided this door panel actually belongs to the new model. The fullsize luxury saloon will make the switch to the W223 generation later this year, and after seeing a camo-free prototype in late January, another grainy image has emerged onto the photo-centric social media platform courtesy of user "cochespias." The door panel is claimed to belong to the next S, but we can't be sure at this point.

The adjacent photo depicts an interior door panel combining a wood trim with aluminium switchgear and some dark glossy surfaces that will likely be a fingerprint magnet. The most interesting aspect of the low-resolution photo is that tiny screen right next to the controls for the electrically adjustable seats. From what we’re able to read, it says the person sitting inside must select the desired settings related to the seat’s memory function.

To the left of the image is a tiny label that says “Faurecia,” which is a Paris-based automotive supplier specialised in car interiors, including for the outgoing S-Class W222. The other label says "Canatu," a Finnish company that develops and manufactures 3D formable and stretchable films and touch sensors.

A portion of the interior door panel is not exactly breaking news, especially since we don't know if it actually belongs to the next-gen S-Class. However, with Mercedes being coy on details regarding the new S-Class, we’ll take anything the Internet has to offer. Should you have any doubts about the automaker behind this, you can easily see the three-pointed star logo on that small screen.

Speaking of screens, our own spy shots have revealed Daimler’s next range topper will have a much different dashboard to accommodate a vertically oriented touchscreen as large as they come. The interior depicted above might not look worthy of an S-Class, but it belongs to an older prototype that lacked a lot of the final bits and refinement we’ll see on the production model.

All future Mercedes S-Class models are expected to have rear doors since rumour has it the S-Class Coupe and Convertible will both be axed to avoid a product overlap with the next SL and AMG GT. Once again, the Benz-branded model will be joined by an elongated Maybach version with all the luxury Mercedes can cram into a big saloon.

The new S is inching closer: