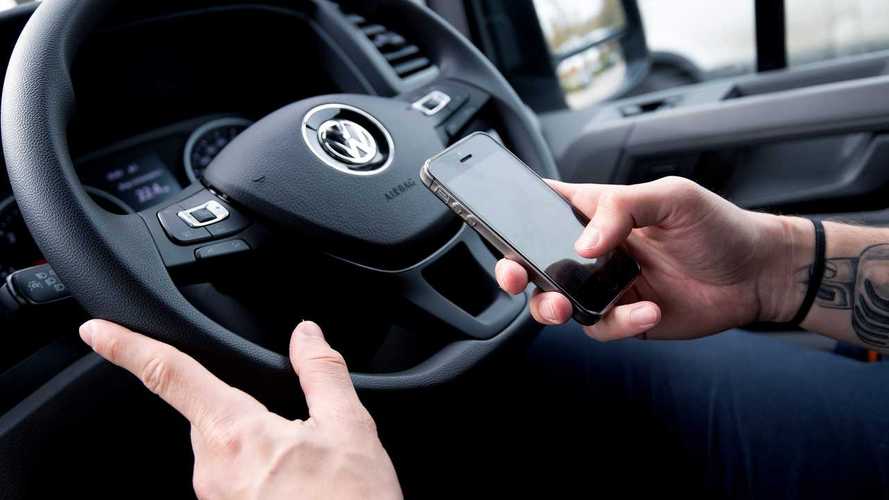 But Volkswagen can help.

Although using the phone while driving is illegal in the UK, and has been for some years, only 41 percent are using hands free or Bluetooth technology regularly according to new research from Volkswagen Commercial Vehicles.

What's more, 17 percent of drivers admit to  sending and receiving texts, checking e-mails or posting on social media while driving according to an RAC report on Motoring from last year. Last year, Volkswagen Commercial Vehicles did its own survey which revealed 23 percent of van drivers don't even have a hands free kit in their van.

Volkswagen's research revealed van drivers in London, Yorkshire, and the North East are most likely to use hands free technology, but Scottish drivers are the least likely to use it.

Three years ago the UK introduced tougher to combat mobile phone use behind the wheel, covering calls, texting, taking pictures, and posting on social media. Drivers now face a fine of £200 and a six penalty points.

To combat the worrying statistics, Volkswagen is fitting bluetooth hands free kits into its entire range of fans as standard, as well as App Connect that allows access to certain apps and the facility to dictate and listen to text or WhatsApp messages.

"Mobile phone use behind the wheel is a topic that we’ve been monitoring for the past couple of years and the recent statistics show it is still a huge safety problem on UK roads," said Claire English, head of fleet at Volkswagen Commercial Vehicles. "Despite carrying a hefty punishment, it lacks the taboo of other offences such as drink-driving and this needs to change.

"As part of our Working With You promise, we’re committed to improving safety on UK roads for both our customers and other road users, always ensuring we provide the right equipment for the job, for example offering Autonomous Emergency Braking (AEB) and a handsfree kit as standard across the range."

Gallery: Less than half of van drivers using hands free tech despite sanctions