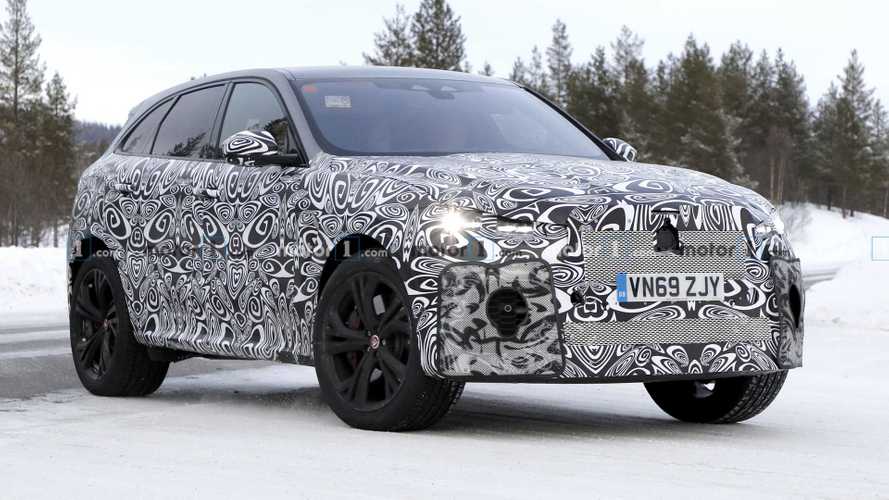 Before 2017, Jaguar was the British automaker famous for luxury saloons and coupes. But then it introduced the F-Pace, it’s first crossover SUV, and it quickly became the brand’s best-selling vehicle. Far from outdated, Jaguar is already preparing to update the F-Pace’s styling inside and out with a mid-cycle refresh.

The regular F-Pace is expected to get a host of upgrades, as is the sportier high-performance Jaguar F-Pace SVR, which our spy photographers caught cold-weather testing with a non-SVR F-Pace.

It took two years after the regular F-Pace arrived for the SVR model to go on sale. However, that delay isn’t stopping Jaguar from giving the SVR a facelift, too. Spy photos show the SVR with camouflage from the beltline down, hiding the usual repertoire of mid-cycle updates. However, the camouflage couldn’t conceal the SVR’s telltale aesthetics – the quad exhaust outlets, red calipers, and larger front air intakes.

The SVR is expected to receive the same visual updates as its less-powerful stablemates. That means customers should expect tweaked front- and rear-end designs – updated grille, headlights, bumpers, and taillights. Inside, Jaguar could give the interior a significant upgrade, much as it did with the refreshed F-Type, replacing the analogue instrument cluster with a digital one and adding Apple CarPlay and Android Auto as standard equipment. Jaguar could enable over-the-air software updates, too.

The SVR’s supercharged 5.0-litre V8 shouldn’t change. It should continue to make 550 bhp (410 kilowatts) and 502 pound-feet (680 Newton-metres) of torque. If anything, horsepower and torque may inch up a few. Power will likely continue to route through an eight-speed automatic gearbox to all four wheels. The current F-Pace SVR rockets to 60 miles per hour in 4.1 seconds. Don’t expect the refreshed one to be slower.

The updated SVR will join the tamer stable of F-Pace trims that should arrive sometime later this year. The spy photos of the F-Pace SVR showed a regular F-Pace out testing as well, though it was also hidden under camouflage. The updated F-Pace is expected to go on sale as a 2021 model year vehicle.