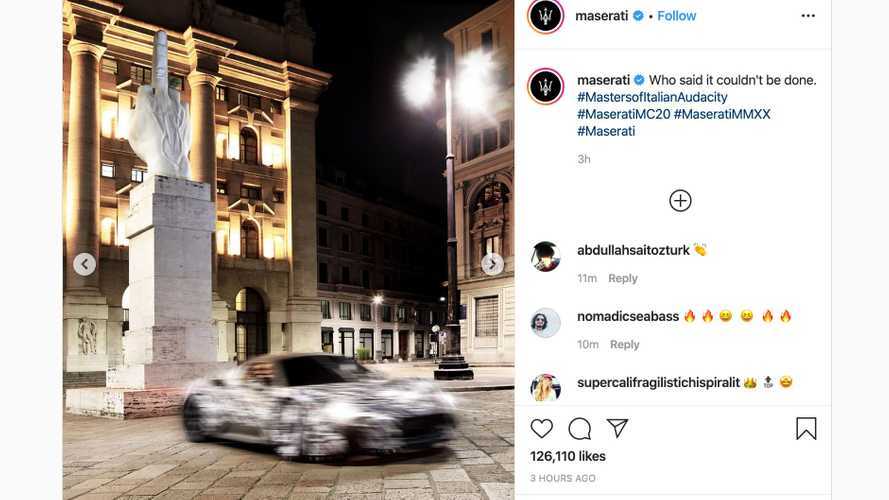 A new post from Maserati on Instagram offers four looks at the upcoming MC20 in front of a huge statue of a hand giving the middle finger. Unfortunately, all of the photos keep the car blurry or capture it from an angle that doesn't show much.

Maserati positions the MC20 as the spiritual successor to the MC12 supercar. Although, the new machine at this stage doesn't look nearly as wild as the previous, Ferrari-Enzo-based model. The current development vehicles have an appearance that's more like a muscular take on the Alfa Romeo 4C. Withhold judgement until the placeholder body panels come off.

According to info from our colleagues in Italy, the MC20 packs a V6 engine and Maserati is handling the powerplant's production without input from Ferrari like powerplants from the recent past. Updates to the Maserati factory in Modena, Italy, to support building electrified vehicles hint that this powerplant might have hybrid assistance. There's a chance to listen to the new mill in a recent spy video.

Does the MC20 get you excited for a revitalised Maserati?

Maserati doesn't have much longer to tease the MC20 because the company intends to unveil the production version in May 2020. The brand's product plan hints at a convertible version joining the lineup next year.

Maserati has a busy year ahead because in addition to the MC20's unveiling in May, the company plans to show off a plug-in hybrid variant of Ghibli at the 2020 Beijing Motor Show in April. The PHEV power arrives in the Levante and Quattroporte later, too.