2021 Skoda Enyaq with production body spied inside and out 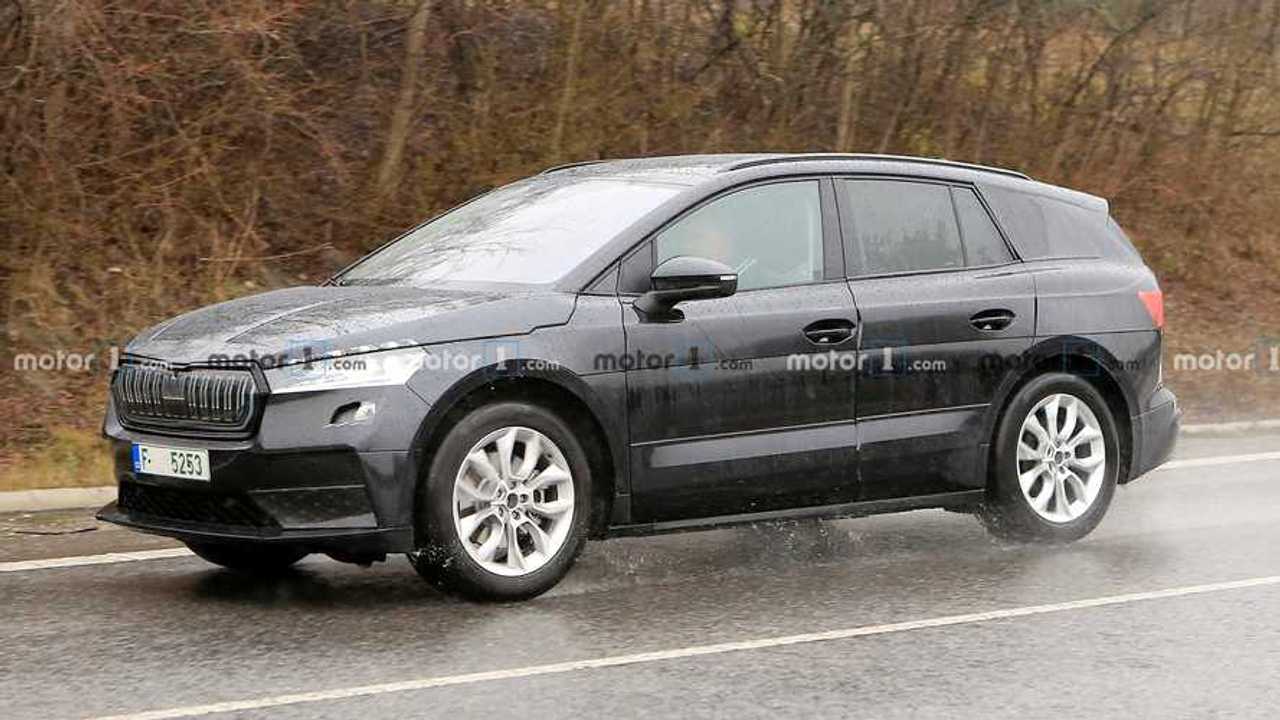 After launching the Citigoe iV as the company’s first electric vehicle, Skoda has now been spotted putting the finishing touches on what will become its second zero-emissions model. We first laid our eyes on the high-riding EV back in October 2019 when a test mule carrying the body of a Volkswagen Tiguan was seen stretching out at the Nürburgring.

Fast forward to this week, the prototype spotted on a Czech highway near the company’s headquarters in Mladá Boleslav appears to have the full production body hiding underneath some rather deceiving camouflage. Skoda usually comes out with prototypes carrying this sort of disguise closer to the model's reveal, so an official debut could take place in the coming months.

Riding on the same MEB platform as the forthcoming VW ID.4, the Enyaq will be a follow-up to the appealing Vision iV concept introduced about a year ago at the Geneva Motor Show. While it won’t look as exciting as the showcar before it, the electric vehicle should have some extra pizzazz compared to the firm’s conventionally powered SUVs, such as the Karoq or Kodiaq. One thing I’d like to add is that while the concept had some coupe influences, the production car will be more in the spirit of a tall estate.

While the aforementioned Citigo is exclusively front-wheel drive, the Enyaq will adopt a RWD layout and could offer an AWD variant seeing as how VW has already promised to introduce an all-paw ID.4. After all, the aforementioned Vision iV (pictured below) did have one electric motor at the front axle and another one at the back.

Speaking of the concept, Skoda said it would do up to 311 miles (500 kilometres) per WLTP, which is the same number promised by VW a few days ago for the production-ready ID.4. In regards to power, the Vision iV with its dual-motor setup produced a healthy 302 bhp (225 kW), but it goes without saying the single-motor variants with RWD will have to make do with fewer electric ponies.

Getting back to the spy shots at hand, our photographers were also able to take a peek inside the cabin where we can observe the dashboard is a significant departure from current Skoda models. A large centre display dominates the cockpit, while the driver’s instrument cluster is flat and wide. Where have we seen that before? Yes, on the Vision iV we keep mentioning. If you squint your eyes, the Enyaq kind of reveals itself on the touchscreen.

Interestingly, the prototype appeared to have an old-school mechanical handbrake and we’re noticing it borrowed the new steering wheel design from the 2020 Octavia. The centre console also looks quite familiar if you’ve been following the Skoda brand in recent years, and that start/stop button has been around for quite a while. Knowing the relationship between VWs and Skodas, the Enyaq should be roomier and more affordable than the ID.4, but less sophisticated.

An official reveal is slated to take place later this year, with sales to commence in 2021.