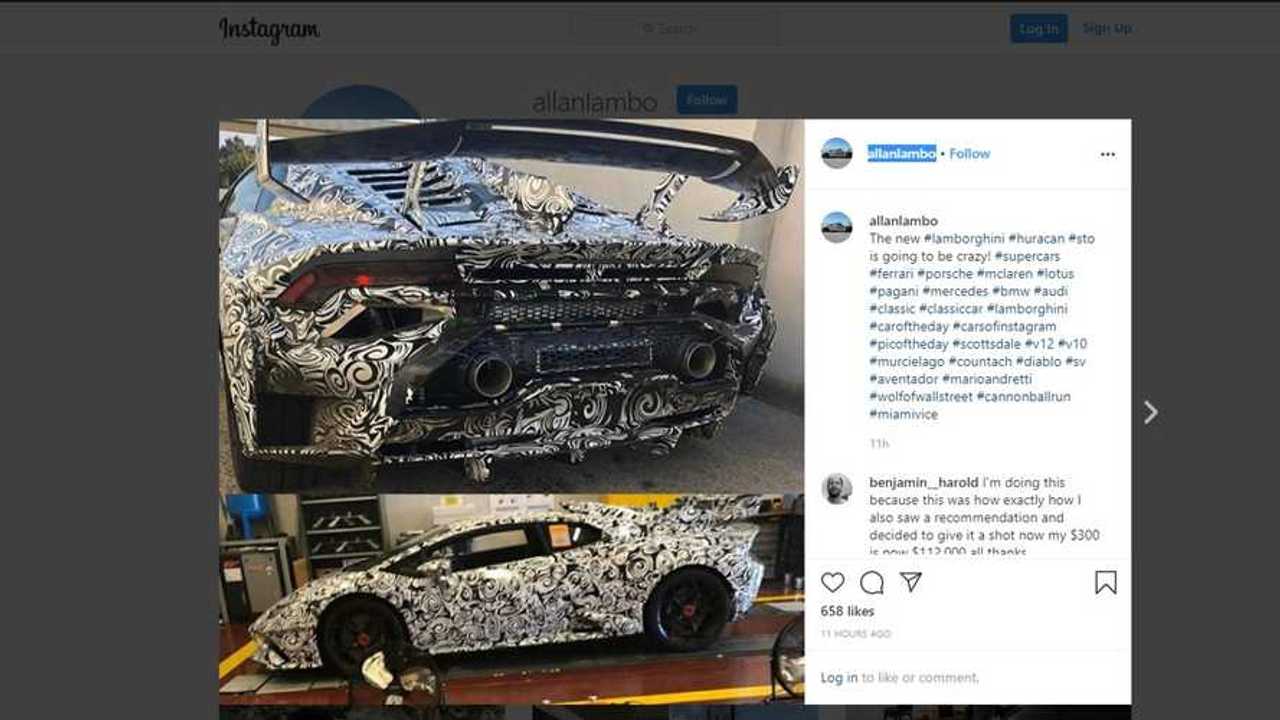 The Super Trofeo Omologato is rumoured to be a rear-wheel-drive Huracan race car for the road.

Rumours of a Lamborghini Huracan STO emerged in June last year when Automobile Magazine wrote about the possibility of a hardcore version carrying the “Super Trofeo Omologato” moniker due for a release in 2020. While they didn’t go into any details about the meaner version of Sant’Agata Bolognese’s V10 supercar, it appears the track-focused raging bull is actually happening.

Two spy shots of a wild-looking prototype were published by “allanlambo” on Instagram, revealing a giant wing and a large roof scoop inspired by the track-only Huracan Super Trofeo. The massive air intakes at the back make the Performante or the Evo look rather tame by comparison, while the rear window louvres further signal this is something truly exciting.

According to a member of the Piston Heads forums, the Huracan STO was given the proverbial green light by the higher-ups at Lamborghini towards the end of 2019. It’s set to arrive as a 2021MY, which means we’ll likely get to see it before the end of the current calendar year. Essentially a road-going version of the Huracan Super Trofeo race car, the rear-wheel-drive STO will allegedly carry over the Huracan Evo’s 631-bhp 5.2-litre V10 naturally aspirated engine, but the car will go through a significant weight loss.

Lamborghini is apparently targeting a diet of around 150 kilograms (330 pounds), which would make the Huracan STO tip the scales at roughly 1,272 kg (2,804 lbs, dry) if we take out that fat from a Huracan Evo Coupe. If that number turns out to be accurate, the STO will be approximately 117 kg (258 lbs) lighter than the Huracan Evo Coupe RWD.

Beefier brakes and some other race-inspired upgrades could be in tow for the tail-happy Super Trofeo Omologato, but it’s too early to know for sure.

Another member of the PH forums heard from a Lamborghini dealer that the company initially wanted to sell the car exclusively to Squadra Corse customers, much like Ferrari did with the 488 Pista Piloti. However, it’s now expected to be a typical special edition affair with a limited production run. The exact number is not known at this point, with some saying 700 will be built while others are reporting it will be capped to only 400 units.

Nothing is official at this point, but Lamborghini reportedly won’t be coming out with a Huracan Evo Performante as its role in the lineup has been attributed to the STO.

While the Super Trofeo Omologato is believed to be a race car for the road, the 818-bhp Aventador will be the exact opposite as Lamborghini Squadra Corse will turn the street-legal V12 hypercar into a track-only beast.