Audi's belated answer to the Tesla Model S will be revealed later this year.

We’re taking a small break from our coverage of the online-only 2020 Geneva Motor Show to bring to your attention the first spy shots of the Audi E-Tron GT.

Unveiled as a stunning concept car in November 2018, the electric saloon is based on the same J1 platform as the Porsche Taycan and has now been spotted testing as a fully camouflaged prototype somewhere in northern Europe. Since the concept wasn’t all that wild as it looked quite close to what you’d expect from a production car, we’re not surprised the test vehicle is similar.

Despite the disguise, it’s easy to notice the E-Tron GT has been fitted with conventional door handles and therefore the side profile doesn’t look as sleek as the concept's silhouette. In addition, the aero-optimised wheels are not as sleek as those of the showcar while the side mirrors are a tad larger, but these are some rather insignificant changes. The general impression we’re getting is that the road-going model will remain pretty much faithful to the concept before it.

The test vehicle appeared to have nearly all of the production bits, including the final headlights and taillights as well as the rear spoiler we can see in action. We’ll remind you the concept had charging ports on both front fender wings, and it could be the same story with the final version seeing as how the E-Tron GT’s sister model, the Porsche Taycan, also has dual charging ports.

Thanks to a 90-kWh lithium-ion battery pack, the Audi E-Tron GT concept was able to cover more than 248.5 miles (400 kilometres) per the WLTP cycle. The 800-volt system enabled the opportunity to charge the battery to an 80-percent level in about 20 minutes, which was enough for a range exceeding 198.8 miles (320 kilometres).

Audi has already announced plans to kick off production towards the end of 2020 and start customer deliveries early next year. It is believed the Tesla Model S fighter will be officially revealed at the Los Angeles Auto Show in the second half of November, although an online debut could occur a few days or weeks sooner. 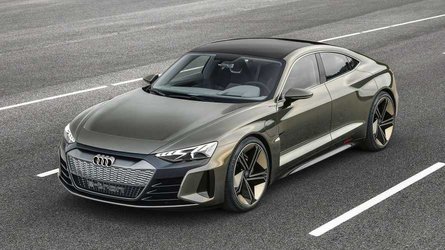 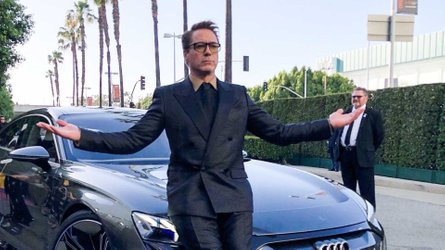 There’s no word about pricing just yet, but it would make sense for the Audi E-Tron GT to undercut the Taycan. The most affordable version of Porsche’s EV is the 4S priced at £83,367.00 RRP, followed by the Turbo at £115,858 and the range-topping Turbo S at £138,826. Much like the electric saloon from Stuttgart, Audi’s counterpart will be offered in various trim levels, and that could include hot S and RS flavours.