The Koenigsegg Gemera has more cupholders than a Nissan Qashqai 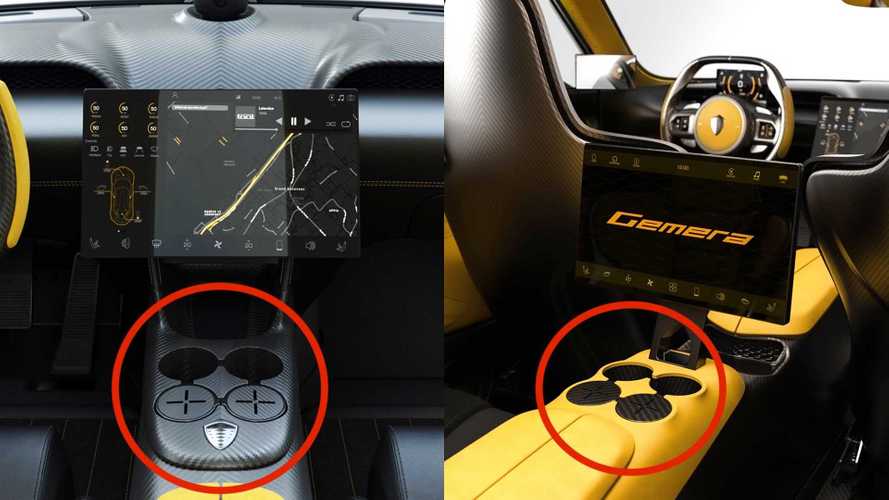 A stand-out fact, among many others.

Despite the cancellation of the 2020 Geneva International Motor Show, Swedish speed freak Christian Van Koenigsegg didn’t miss the opportunity to debut his latest insane creation. In addition to a more potent version of the Jesko, Koenigsegg unveiled the Gemera – a four-seat, 1,700 bhp (1,268 kilowatts), three-cylinder hypercar. While the power figure may be the headline, the latest Koenigsegg is full of surprises, including this odd fact: it has more cupholders than the average compact crossover.

Count 'em yourself. Eight beautiful carbon fibre cupholders, the two front ones heated and cooled (!), to accommodate beverages for you and your three closest friends. Practical, right? That’s four more cupholders than you get standard in a Nissan Qashqai, two more than you get in a base Ford Kuga, and matches the number available in the Mazda CX-5 and Toyota RAV4.

But it doesn’t end there. Front and rear seat wireless phone charging, Apple Carplay, and three-zone climate control also make the cabin a bit more enjoyable on long journeys. Thanks to its intuitive layout, the Gemera accommodates one carry-on piece of luggage per passenger, as well, with room for three in the boot area and one in the frunk. The Gemera doesn’t qualify as an Uber car, unfortunately, because of its two-door layout. But with doors that go up automatically, there’s enough room for both rows of passengers to enter and exit with ease.

Koenigsegg fixed a problem that nobody – literally not one person – complained about: cup holders and cargo space in a hypercar. The Gemera’s mission is to bring "ultimate performance" to a more practical vehicle, and the car makes good on that promise with a truly mind-bending set of facts and figures.

More from the debut:

Jesko Absolut debuts as the fastest car Koenigsegg will ever make
⠀

Three electric motors combine to create 1,100 bhp (820 kilowatts) supplemented by a twin-turbocharged 2.0-litre three-cylinder adding another 600 bhp (447 kilowatts). The hybrid powertrain puts out a truly staggering 1,700 bhp in total, enough to propel the Gemera to 62 miles per hour (100 kilometres per hour) in 1.9 seconds. Let’s hope those cupholders are effective. The powertrain is also potentially carbon-neutral, with the ability to run on biofuels and electric power. To ensure an engaging drive experience, the Gemera also employs four-wheel drive, four-wheel torque-vectoring, and four-wheel steering technology.

Koenigsegg plans to build 350 examples of the "Mega GT" Gemera, for customers seeking a very fast road trip with multiple companions. And although we’re not exactly convinced that this limited-run grand tourer will replace crossovers in customer’s driveway, we love the thought of it.