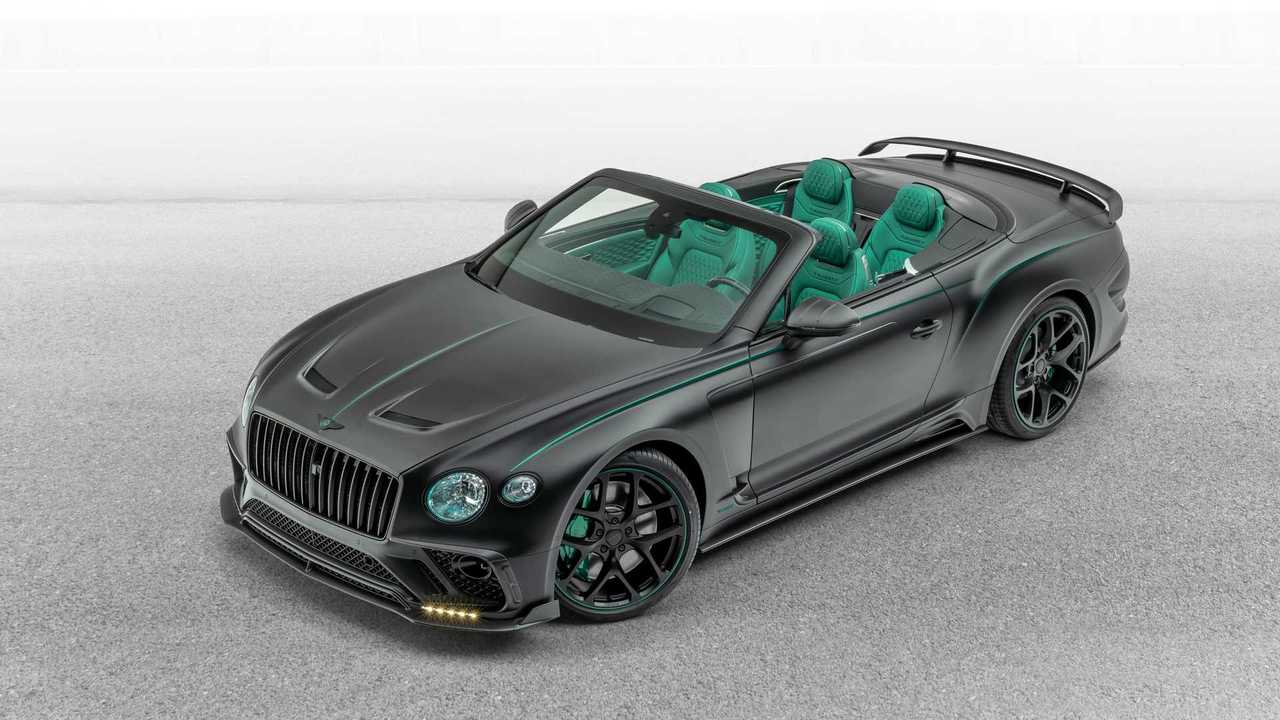 It gets a power boost, too.

Mansory isn’t known for being subtle with its projects, and this interesting Bentley Continental GT Convertible is no exception. That’s notable, because black usually isn’t a stand-out colour. Trick it up with carbon fibre and bright green trim– a shade Mansory specifically calls Green Chrome-Oxite – and it suddenly becomes very noticeable.

The obvious Mansory upfit here is the green interior, so we’ll start there. Quilted leather and fabric are everywhere in the greenhouse, from the dash to the centre console, doors, floor, and obviously the seats. They wear the aforementioned Green Chrome-Oxite covering; so does the steering wheel, door panels, and other trim items throughout the interior. We certainly see where the chrome in the name comes from.

Take a tour of the wild Mansory Venatus Lamborghini Urus

You’ll find more green trim on the Continental’s exterior with thin stripes near the beltline. It’s a sharp contrast to the matte black finish covering the rest of the car, not to mention Mansory’s carbon-fibre body kit. The custom 22-inch multispoke wheels also get a touch of green around the edges, and behind then sit green brake calipers. Pop the bonnet and you’ll find a bit of green as well, and we aren’t talking money – the large cross member reinforcement bar absolutely stands out amid the sea of black plastic, as does the Mansory branding.

There’s a bit more power under the bonnet, too. The infamous tuner installs a new exhaust system and dives into the electronic brain for the big Bentley’s boosted V8. Between the new tune and exhaust upgrade, the Continental GT reportedly makes 631 bhp (470 kilowatts), which is enough to send the large Cabrio to 62 mph (100 km/h) in less than four seconds.

We’ll say this much for Mansory. It never fails to garner attention with its automotive projects, and while we suspect this black/green combination might be polarising to some, there’s no denying this is one quick ride. Is it quick enough to outrun the glow of its own seats? We’ll leave that for you to decide, dear readers.

The refinement of super sports cars and luxury limousines is more than just a business for MANSORY. The love for detail, for the special and especially for the unique are always an incentive for extraordinary developments.

The latest creation of the MANSORY company proves this once again impressively. The MANSORY interpretation of the current Bentley Continental GT Cabriolet V8 will not only make the hearts of die-hard Bentley fans beat faster.

The MANSORY brand is associated like no other with carbon, the favourite material of Formula 1 and space travel. Unlike other tuners, MANSORY manufactures all the carbon components used on the vehicle itself in its own autoclaves and does not rely on external suppliers or partners. This requires a great deal of know-how, which the engineers and designers have gathered over many years of experience and perfected to the highest degree. Targeted interventions on the bonnet, the front, side skirts and rear have resulted in a measurable improvement in aerodynamics. And the matt black paintwork alternating with the richly incorporated design elements in visible carbon fibre emphasise the numerous MANSORY conversion measures on the exterior and add up to an impressive and elegant overall appearance of the car.

And since performance also benefits greatly from the improved downforce values of these aerodynamic changes, this plus in agility and handling also creates room for a significantly increased engine output.

This is where the refinement specialist MANSORY brings its entire know-how in the field of performance enhancement of high-performance units into play. In addition to a modified ECU unit for the engine control unit, the MANSORY R&D department has also fitted the V8 twin turbo with a high-performance exhaust system, thus noticeably enhancing the acceleration and elasticity of the Bentley Continental GT Cabriolet thanks to its power unit which has now been increased to 640 hp (471 KW) and 890 Nm. The sprint from 0 to 100 km/h is thus completed in short 3.8s.

Technically and visually, the wheel and tyre combination has also been perfectly matched to the impressive performance plus and the refined bodywork. The “BY5” forged rims in the dimension 10x22 inch on the front axle and 12x22 inch on the rear axle guarantee maximum load capacity and stability with minimum unsprung masses. On the car shown on the images the “F23” multispoke forged wheels - which are also available for the Bentley Continental GT Cabriolet - are alternatively mounted on one side of the vehicle with identical dimensions. For maximum grip both rim types are covered by ultra-high-performance tyres in the dimensions 275/35 (front) and 315/30 millimetres (rear).

Of course, the interior has also been completely relined with “green chrome-oxite” leather by MANSORY's in-house saddlery and elaborately decorated with a special diamond quilting. Seats, fittings and other interior components were almost lavishly wrapped in this leather, often supplemented with carbon applications and selectively upgraded. This applies, for example, to the sports steering wheel, the gear lever for the eight-speed automatic transmission and the centre console.

Further information about this vehicle and all MANSORY refinement programs can be found on the website: www.mansory.com