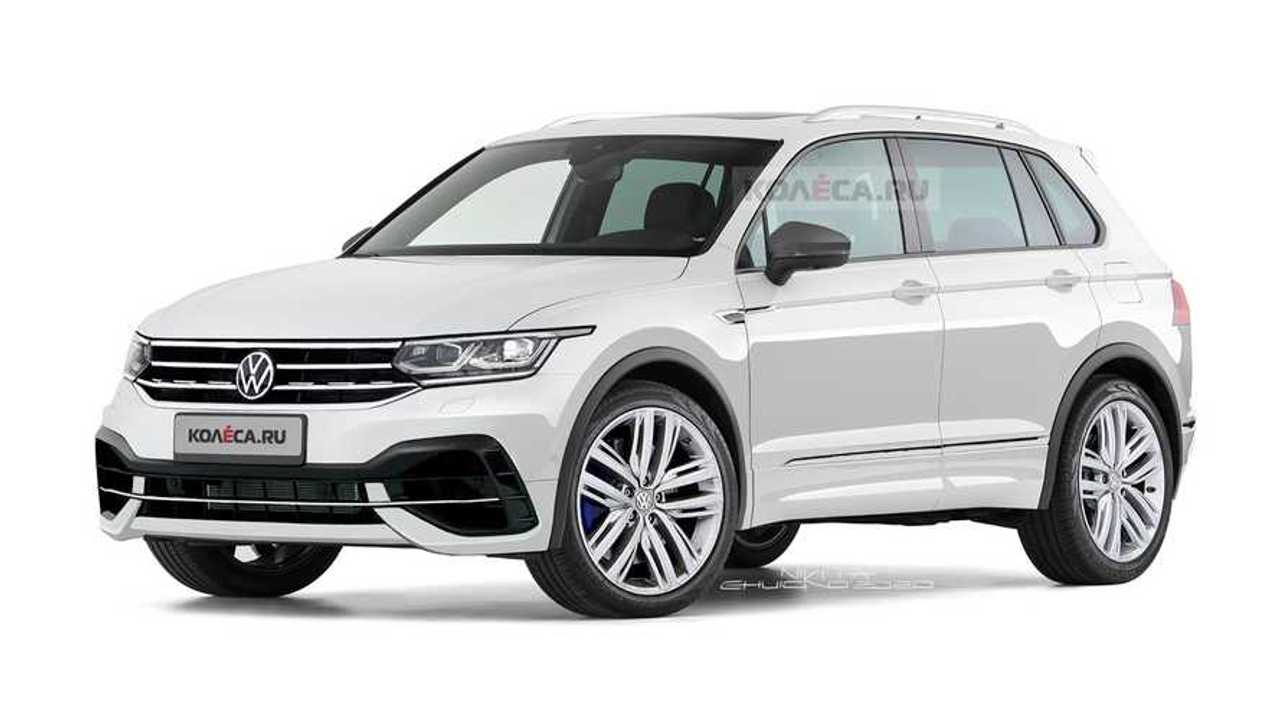 Last week, our spy photographers caught the Volkswagen Tiguan R out testing in the snow. The last time we’d seen it was last May when it wore the current Tiguan’s styling. But VW is giving the regular Tiguan a mid-cycle facelift, and it appears the Tiguan R will enjoy the updated styling, too. The spy photos showed the hopped-up performance crossover larger front intakes, quad exhaust, and more, and our friends at Kolesa.ru created two renderings of what it could look like when it arrives.

Just like the spy photos, the renderings show Tiguan that’s either lowered slightly or wears larger wheels and tires. The lower front fascia houses massive intakes to feed the engine, while blue brake calipers help provide stopping power. At the back, the quad-exit exhaust is one of the few indicators of the crossover’s sportier intentions. One thing that was visible on the Tiguan R test vehicle was the drilled brake rotors. Those aren’t visible in the renderings.

VW Tiguan is getting a facelift:

The rendering also takes a few liberties with the Tiguan R’s design. The daytime running lights around the headlights extend into the front wings, which we don’t see in the spy photos. There’s also a chrome wing badge that starts the sharp crease down the side that cuts through the door handles and fuel door to the rear taillights. It’s not on VW’s spied Tiguan R.

When VW began developing the Tiguan R, rumours suggested it’d be powered by the five-cylinder from the Audi RS Q3. However, now that so much time as passed during the crossover’s development, the latest rumours indicate VW will put its 2.0-litre TSI four-cylinder engine under the bonnet, pair to a DSG gearbox, and send the power to all four wheels thanks to VW’s 4Motion all-wheel-drive system. Whichever mill powers the Tiguan, it should make close to 330 bhp (246 kilowatts) – more than the 296 bhp (221 kW) produced in the T-Roc R.

The VW Tiguan R has been in development purgatory for at least three years. It may have been put on the back burner for longer than we would have liked, but the new spy photos from last week have reinvigorated the hope that it’ll finally arrive.