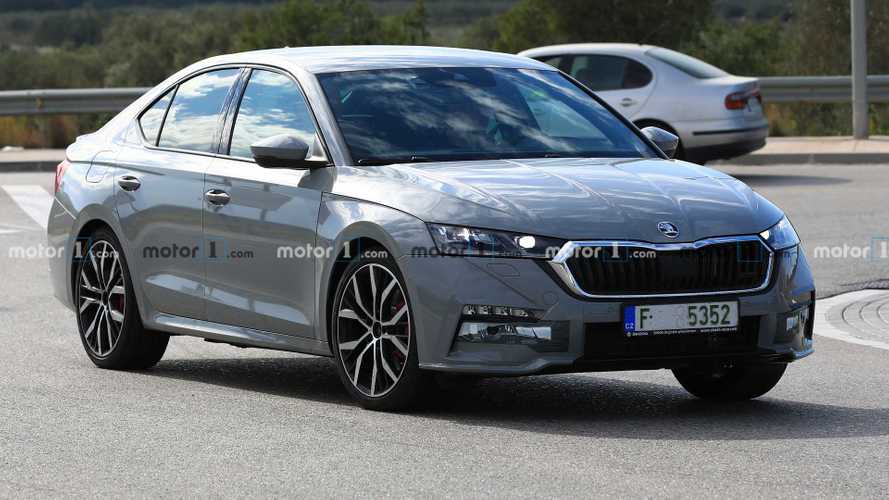 This is pretty much it.

We are only a few days away from the Octavia RS’ debut at the Geneva Motor Show, but it looks like Skoda is anxious to reveal its new hot hatch as the Golf GTE’s more practical sibling has been spied with very little camo. Notice how we said “GTE” rather than “GTI”? That’s because the near-production prototype caught by our spies in Spain was the plug-in hybrid version with an electrified powertrain shared with the PHEV variants of the Golf and the recently introduced Cupra Leon. The dead giveaway is the extra cap mounted on the driver’s side front wing.

The only disguise slapped onto this car is noticeable at the front bumper where there are stickers mimicking the fog lights of an older Octavia model, even though the actual RS-specific LED fog lights are right above it. In typical Volkswagen Group fashion, the styling changes over the regular model are rather subtle, and include a slightly more aggressive design for the bumpers along with larger wheels backed by beefier brakes.

The car sits slightly lower than a lesser Octavia as a result of installing a stiffer suspension setup to improve handling. At the back, the subtle spoiler denotes this isn’t your typical version of Skoda’s best-selling car, while the dual exhausts further reveal the car’s performance-oriented nature. As much as we hate to be the bearer of bad news, we strongly believe the right exhaust finisher is just for show as it does not seem to be connected to the actual exhaust tip. Instead, the real ones are hiding behind that angular exhaust finisher on the left side.

The plug-in hybrid powertrain will combine a 1.4-litre turbocharged gasoline engine with an electric motor to offer a total confirmed output of 242 bhp, with torque likely to stand at 400 Newton-metres (295 pound-feet) as it’s the case with the electrified Leon. There’s a pretty good chance you won’t be able to row your own gears as the Octavia RS iV could be offered exclusively with a dual-clutch automatic transmission (DSG) much like its Spanish cousin.

After the market launch of the Octavia RS iV, conventionally powered versions with follow, with a 2.0-litre TSI model due to offer 241 bhp while a 2.0 TDI model will have 197 bhp. The petrol-fuelled model will give buyers the choice between a six-speed manual and a seven-speed DSG, with the latter being the sole gearbox for the diesel.

Meanwhile, the plug-in hybrid Octavia RS is bound to premiere on March 3 at the 2020 Geneva Motor Show.