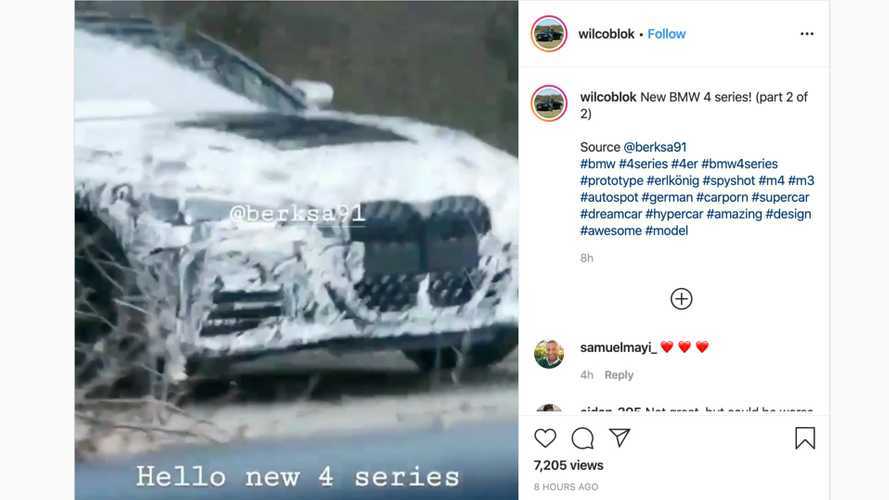 It's our worst nightmare.

A pair of new spy videos catch the BMW 4 Series with a new camouflage layout, and there's very bad news. The coupe no longer wears as much concealment at the front, and this reveals the car's gargantuan grille opening. BMW really appears to be pushing forward with giving models the massive mouth from the Concept 4.

The first video (below) shows the 4 Series development vehicle while the driver is pulling out of a concealed driveway. The trees slightly conceal the car but not enough to hide the huge grille. The vehicle also appears to have the production-spec headlights and taillights.

The second video (below) provides a slightly better view of the new grille. Like on the Concept 4, the opening extends from the contoured bonnet to the bottom of the lower fascia. It's an eye-catching look, but makes the BMW appear to be trying really hard to get attention. We can't wait to find out whether the general public accepts the new styling.

Earlier leaks already practically confirmed the huge grille for the 4 Series. Somehow, it looks even bigger on a vehicle without camouflage.

The new 4 Series will reportedly debut this summer, and production will start in November. The high-performance M4 variant will likely premiere before the end of the year, too. The meaner model will use a version of the BMW S58 3.0-litre twin-turbo inline-six engine making over 500 bhp (373 kilowatts). Buyers will be able to select rear- or all-wheel-drive layouts.