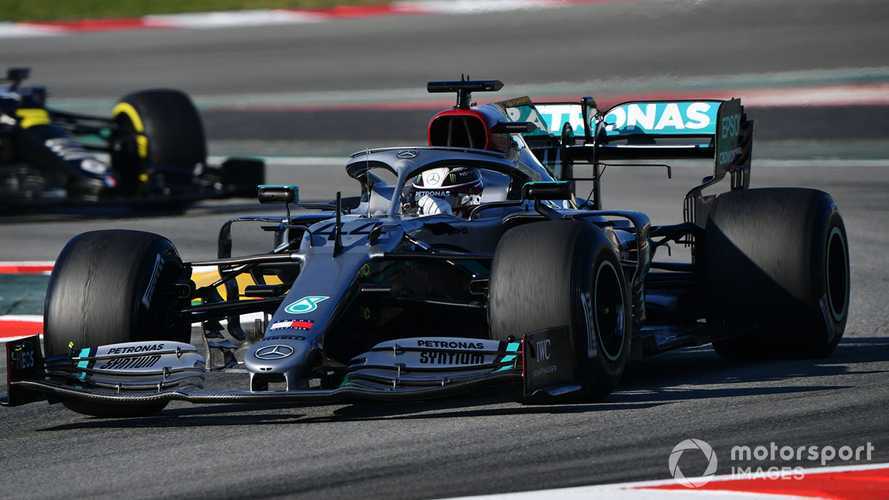 Mercedes’ rivals have conceded they were left “wide-eyed” when the reigning champion team debuted its new dual-axis steering system in the opening Formula 1 pre-season test.

Mercedes sparked intrigue through the paddock when footage emerged of Lewis Hamilton adjusting the toe angle of his front wheels by pulling his steering wheel towards himself in the cockpit.

While the system has been deemed safe and legal by the FIA under the technical regulations, it may be challenged under the parc ferme rules that restrict car changes after the start of qualifying.

Renault sporting director Alan Permane said that although there was a “question mark” over DAS under the parc ferme rules, he was impressed by the innovation of the system.

“I think we were a little bit wide-eyed [about] what’s it doing, how’s it doing it,” Permane said.

“Like most people I think we did a bit of video analysis. We don’t know what it’s doing I guess.

“James [Allison] and his men have done something clever and undoubtedly they think there is plenty of lap time in it.

“Obviously Mercedes have clearly found something they think is a benefit, and I think that’s one of the rather wonderful things about Formula 1.”

McLaren team principal Andreas Seidl was also full of praise for Mercedes’ introduction of the new concept, noting how it had captured the attention of the whole F1 paddock.

“Hats off to Mercedes for this kind of innovation, which is great to see in Formula 1,” Seidl said.

“Hats off also for all the publicity they created for Mercedes by that.

“I don't know details about the system, so I think it will be wrong to even judge it, what it brings, and so.

“I think for us as a team where we are right now, we have other areas we have to focus on, where we can make bigger steps than trying to copy a system from Mercedes.”

Ferrari F1 chief Mattia Binotto acknowledged the innovation of the DAS system, but said he did not think it would be decisive in the title fight against Mercedes this year.

“There are a lot of innovations on cars, and I think that a few of the solutions which are on the Mercedes have been copied from the Ferrari, and vice versa,” Binotto said.

“[DAS] is certainly visible. As a game changer? I don't think so.

“I think it's part of the entire package and as such I think it's a good package they've got."