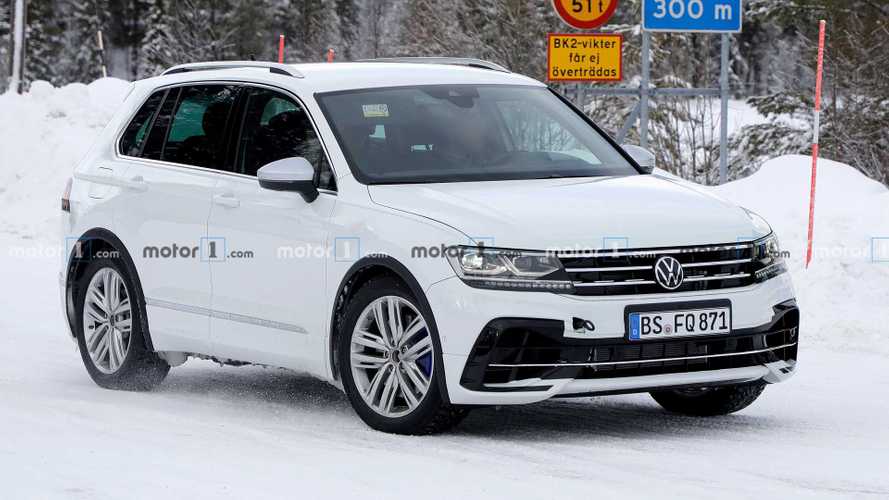 It looks like the high-performance Tiguan is finally happening.

We’ve been sharing spy shots of the Tiguan R for more than three years, but the peeps from Volkswagen have yet to reveal the high-performance compact crossover. A new batch originating from northern Sweden has just arrived and it’s a bit more special than previous ones because it depicts the facelifted model. Even though VW has been testing the first R-badged Tiguan long before the impending mid-cycle refresh, it appears the production version will actually come along with the refreshed model.

The adjacent spy shots might not seem all that interesting at a first glance, but the look at the back and you’ll notice the quad exhaust system. In addition, there are drilled rotors at the front axle where they’re hugged by blue brake calipers. There’s also some deceiving camouflage up front to conceal the generous intakes feeding air to the uprated engine.

There are some interesting stories regarding the powertrain found underneath the bonnet as it is believed VW initially tested the Tiguan R with the five-cylinder mill of the Audi RS Q3. However, rumours indicate the actual production version will have the familiar 2.0-litre TSI four-pot linked to a 4Motion all-wheel-drive system and a DSG transmission.

Some say the Tiguan R was delayed for two different reasons. First, VW apparently decided to prioritise the homologation of its existing models to comply with the stricter WLTP emissions regulations. Second, the decision to roll out a standalone Cupra brand forced VW to channel more of its development efforts into the high-performance Ateca, a sister model of the Tiguan R.

For these reasons, the Tiguan R was put on the backburner, but these new spy shots confirm VW is putting the finishing touches on the speedy crossover. It should have close to 330 bhp taking into account the upcoming Golf R was listed on an internal slideshow as having 245 kilowatts. It would make sense for the Tiguan R to pack more punch than the 296-bhp T-Roc R given its higher positioning in the lineup and what will surely be a steeper asking price.

We’ve been waiting for several years to see the Tiguan R, and it finally seems VW is almost ready to release it.