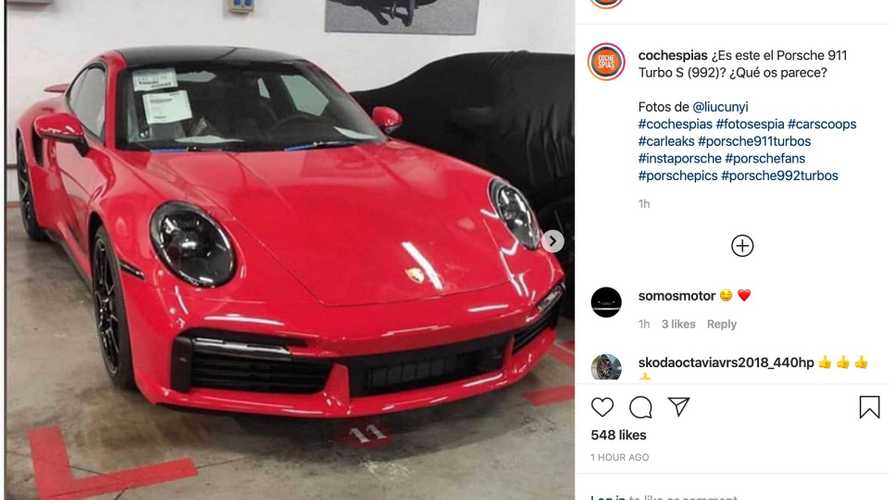 Images of a completely uncamouflaged and seemingly production-ready 992-generation Porsche 911 Turbo S have leaked out from the Instagram account Cochespias. The three photos provide an extensive look at the exterior of the new coupe, except for showing off the rear. The speedy coupe makes an official debut at the Geneva Motor Show in March.

In front, the 911 Turbo looks very similar to the Carrera S. The major difference is that the openings above turn signals is larger. The three-inlet layout for the lower fascia is similar, but there appear to be more horizontal slats in the corners of this variant.

The biggest design change for the new 911 Turbo in comparison to the Carrera models is that this one has inlets in the rear quarter panels for getting more air into the engine bay. There's also a larger wing on the back that looks like a lip spoiler when down, but spy shots tell us the piece extends upwards. This one also has a decal on the lower part of the doors that proclaims it's the 911 Turbo S, in case you aren't sure about the vehicle's identity.

Rumours suggest the 992-generation 911 Turbo would retain the existing model's 3.8-litre twin-turbo flat-six. The output for the S could be around 640 bhp (477 kW), and the horsepower would run through an eight-speed dual-clutch automatic to an all-wheel-drive system.

Following the 911 Turbo coupe's debut, the convertible shouldn't be too far behind.

Get Some More Info About The Upcoming 911 Turbo:

2021 Porsche 911 Turbo all but revealed in new spy photos
Source: cochespias via Instagram
++