Porsche 911 GTS spied in eye-catching green with no camouflage 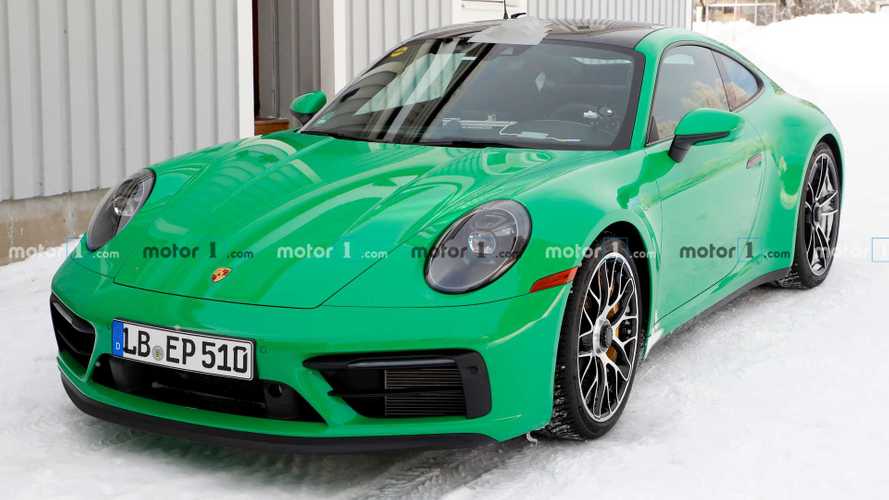 The model takes the Carrera S and makes it a little hotter.

The meaner GTS variant of the 992-generation Porsche 911 is on the way, and these spy shots provide a look at the coupe without any camouflage. The bright shade of green looks stunning on the car, too.

The GTS is a step above the Carrera S in the 911 lineup. Spy shots show that it has a different front fascia with angled uprights connecting the splitter to the bumper.

Along the side, the coupe wears centre-lock wheels with a different design at each end – don't expect this from the production version. This one's yellow brake calipers indicate it has Porsche Ceramic Composite Brakes, but examples in other spy shots show the brand's standard red stoppers. The suspension also appears to drop the 911s ride height slightly.

At the back, Porsche fits a slightly different bumper with larger vents in the corners. A pair of big, oval-shaped exhausts emerge from the tail. This one also has clear lights, which might replace the usual red lamps.

The previous GTS model had a power upgrade over the Carrera S. This is likely true for the new one, too. Look for the new one to offer at least 460 bhp (343 kilowatts) and possibly upwards of 475 bhp (354 kW).

The latest Porsche 911 Turbo allegedly debuts at the Geneva Motor Show in March. This would likely put the new GTS' unveiling after that event. Still, the lack of camouflage on models in recent spy shots suggests that a debut shouldn't be too far away. Expect sales to begin before the end of the year.