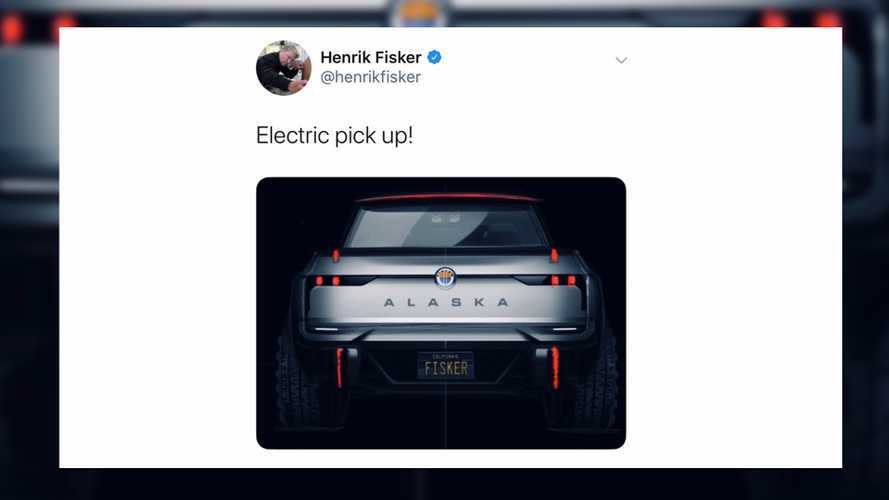 It’s becoming very clear that, in the EV world, the next big thing is electric pickup trucks. Case-in-point is a social media post that was up briefly on Twitter from Henrick Fisker, teasing the backside of what will presumably be known as the Fisker Alaska pickup truck. Don’t bother searching Twitter for it – the post was removed shortly after we saw it, but we managed to grab a couple of screenshots before it went away.

Was the Twitter post a mistake? Henrik Fisker is the man in charge, and this tweet did come from his account – with the clear label of being an electric pickup no less. In an email to Motor1.com, a Fisker spokesperson said the tweet was "unintentional" and "can’t confirm the model or name of a vehicle that may have been seen in the Tweet." However, the company did confirm that a modular electric platform is being worked on, and it could underpin "several different affordable EV models in the future."

In any case, it’s only the second time we’ve caught wind of Fisker’s efforts on a truck, but aside from its name possibly being Alaska, there’s not much else to tell. The photo appears to be a computer-enhanced rendering taken from a sketch, as those extremely aggressive off-road tyres look hand-drawn. Otherwise, it’s a chunky monkey like most other EV trucks we’ve seen, though a rear-only perspective certainly hides what the cab might look like.

Similarly, nothing is known about when such a truck might come to market, or how much it could cost. Our colleagues at Inside EVs caught the first teaser last August, which offered little more than a statement that a Fisker truck would use the same platform as its SUV. We do know something about that – the Fisker Ocean debuted last month at the Consumer Electronics Show in Las Vegas with a 300-mile range and a starting price of $37,499 (approx. £28,900 at the current exchange rate). It’s an intriguing cost for what looks like an attractive and capable SUV, but production won’t begin until next year and the first deliveries aren’t expected until 2022.

The only Fisker so far:

That’s a long time for buyers to wait in the fast-paced SUV world, and presumably, this as-yet unconfirmed pickup truck would take even longer to arrive. Meanwhile, Tesla, Ford, and General Motors are planning to have electric trucks out late next year, with Rivian still shooting for a late-2020 arrival for its R1T.