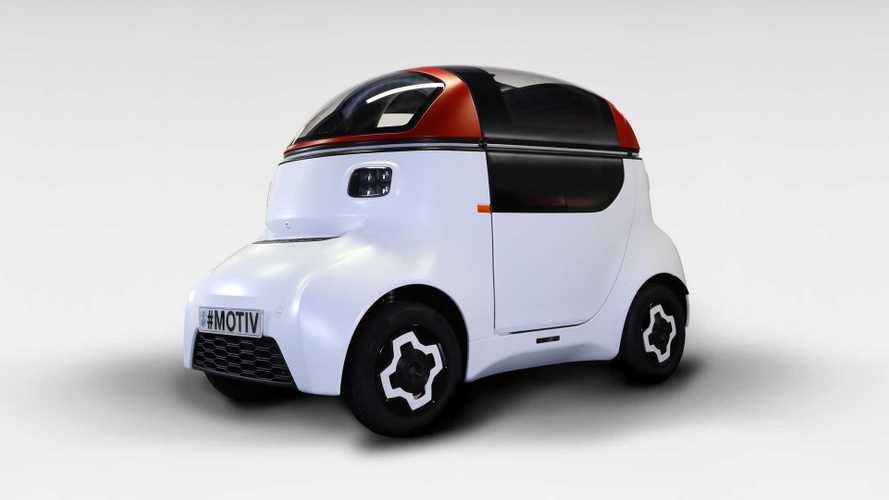 MOTIV is an autonomous electric vehicle platform for manufacturers that would like to introduce single-seat robo-taxis.

Gordon Murray Design, Delta Motorsport and itMoves presents its joint project, the MOTIV autonomous vehicle platform, which will be shown at the MOVE 2020 show at ExCeL, London (11-12 February).

The MOTIV is a single-seat pod vehicle (not the prettiest, that's for sure) for the last-miles (there might also be a version for wheelchair use or commercial deliveries), all-electric and envisioned for the L7e quadricycle category.

It could be a kind of self-driving taxi/car-sharing vehicle for individuals, which - according to Gordon Murray - might enter production in 2 to 5 years, depending on the particular application.

"For Mobility as a Service (MaaS) providers, MOTIV offers a unique proposition due to its compact size, extensive versatility and capable range. MOTIV provides the opportunity for MaaS providers to use a product that is ready for immediate adaptation to driverless use with any form of autonomous technology. MOTIV is the first of its kind to offer this degree of integration simplicity. To support its transition to autonomous road use, the consortium aims to partner with autonomous technology providers for multiple pilot studies. Dependent on application and legislation, this will be the vehicle’s final development stage and it could be ready for mass production within two to five years."

Gordon Murray Design and its consortium partners Delta Motorsport and itMoves are set to unveil ‘MOTIV®’, a unique and extremely versatile autonomous vehicle platform at the MOVE 2020 show in London on 11-12 February.

Designed with autonomy in mind, MOTIV is a single-seater ‘pod’, which provides the versatility of either personal transportation or last-mile deliveries. Engineered using Gordon Murray Design’s iStream Superlight® technology, the vehicle’s single-seater layout provides a private mobility experience for people moving through busy cities, many of whom typically travel in larger combustion-engined vehicles with single occupancy*. MOTIV has the potential to significantly reduce congestion and emissions in city centres due to its fully-electric powertrain and compact footprint. The 1,628mm high pod measures just 2,537mm in length, with a width of 1,310mm.

Due to its compact footprint and layout, MOTIV offers greater flexibility than any of its rivals. To further increase its practicality, MOTIV can be adapted in the future to seat multiple occupants; for wheelchair use; or even for commercial deliveries. In its goods transportation form, the platform can be altered to enable maximum load capacity, creating a volume of more than 1,100 litres.

For Mobility as a Service (MaaS) providers, MOTIV offers a unique proposition due to its compact size, extensive versatility and capable range. MOTIV provides the opportunity for MaaS providers to use a product that is ready for immediate adaptation to driverless use with any form of autonomous technology. MOTIV is the first of its kind to offer this degree of integration simplicity. To support its transition to autonomous road use, the consortium aims to partner with autonomous technology providers for multiple pilot studies. Dependent on application and legislation, this will be the vehicle’s final development stage and it could be ready for mass production within two to five years.

MOTIV is powered by a 20kW electric motor, and will be equipped with a 17.3kWh liquid-cooled battery pack providing a potential range of up to 100km. It will operate at speeds of up to 40mph (65kph), making it ideal for operating in urban and suburban locations. It is equipped with CCS charging capability and can recharge from 20% to 80% battery in just 40 minutes.

MOTIV utilises Gordon Murray Design’s iStream Superlight technology, with ultra-lightweight high strength extruded aluminium in the chassis (iFrame®), composite panels and door (iPanel®), plus aluminium suspension (iLink®) to ensure that vehicle weight is kept to a minimum. Using this technology ensures the weight of the vehicle is kept below 450kg (excluding batteries), which reduces the amount of raw materials used in the manufacture of the platform when compared to conventional vehicle manufacturing techniques, it also significantly reduces the size of battery required without impacting vehicle range. Also, MOTIV features an eye-catching gull-wing door that provides unrivalled accessibility and weather protection for passengers or loading goods.

Professor Gordon Murray CBE, Chairman of Gordon Murray Group, said: “MOTIV has the potential to transform future mobility. The best way to make any vehicle commercially viable and cost-effective, while delivering first-class efficiency, is to make it as light as it can be while retaining the highest levels of safety. With MOTIV we have used our iStream® technologies to create an ultra-lightweight body structure that delivers a vehicle that is compact, refined, safe and versatile, while remaining capable of significant range.”

Nick Carpenter, Engineering Director,Delta Motorsport, commented: “In developing the MOTIV, we’ve demonstrated that the future of mobility is lightweight, battery-powered and private. The control systems integrated into the platform prove that electrified vehicles need not be heavy and cumbersome, but can be lithe, lightweight and energy saving. MOTIV’s ‘plug-and-play’ high-voltage system makes it a truly viable solution to the world of autonomous driving.”

Advanced mobility and innovation specialist itMoves was responsible for the vision behind MOTIV, including the vehicle concept, strategy usability and visual image. The design of the vehicle is contemporary, while also remaining compact and city friendly. The interior of the vehicle provides an easy-to-access, comfortable space with an integrated HVAC system and room to perch a laptop.

Jose Paris, Director of itMoves commented: “The MOTIV design philosophy is based on three points: small footprint, first class interior, and a city-friendly image. The small size takes advantage of the fact that most people commute and move around by themselves. Space in cities is at a premium, and it should not be wasted on empty seats. The spacious interior is comfortable and provides an up-to-date user experience, acting as a ‘third space’, to move around, work or relax in. Lastly, it is all wrapped up in a city (and citizen) friendly visual language that connects and integrates the vehicle with its surroundings in a non-threatening way.”

Homologating MOTIV as a quadricycle has various benefits for OEMs and MaaS providers. Firstly, it is lightweight. A quadricycle must weigh less than 450kg, this means that it is nimble and compact, which makes it a viable option for busy city streets. Gordon Murray Design has engineered MOTIV to conform to European passenger car (M1) crash safety standards, making it the first quadricycle to incorporate passenger car safety levels. This achievement is made possible by the high-strength properties of its iStream Superlight structure. Another benefit is that, as a quadricycle, it is simpler to produce than a car. The less complex production process cuts per-unit build time and reduces waiting times for OEMs and MaaS providers looking to enter the market.

As a development test bed for autonomous systems, MOTIV’s autonomous-ready design is far easier for companies to convert than a conventional vehicle. Typically, a conversion of a regular vehicle to become autonomous requires more hardware, more time and has obvious compromises – conventional vehicles are comparatively large, cumbersome and inefficient.

As MOTIV was purpose-built as a platform for autonomy, testing of its driverless capabilities can begin from launch, which gives it the potential to be the first fully-autonomous single seater pod available on the market.

As a small footprint single seat vehicle, MOTIV offers a unique private solution in the market. A recent Transport for London survey showed that the rate of single occupancy within traditional cars and vans in London is on average greater than 60%. Across the UK, this number is as high as 80%* for local journeys. European occupancy rates show a similar trend with an average of 1.1 - 1.2 people per vehicle**.

MOTIV is due to be launched at the MOVE ‘Mobility Re-imagined’ show on 11-12 February at the ExCeL in London and will be on the Gordon Murray Design stand.

Gordon Murray Design is a visionary design and engineering company headquartered in Surrey, UK. Established in 2007, its focus is on developing innovative and disruptive manufacturing technologies trademarked iStream®. The company has built a global reputation as one of the finest automotive design and engineering teams in the world.

The company’s unique approach and truly creative thinking enables Gordon Murray Design to deliver complete car programmes in a highly efficient and innovative way from concept and design, through to prototype and development for production.

Formed in 2005, Delta is an innovative engineering business, based at the world-famous Silverstone Circuit in the heart of the UK’s high-performance technology cluster.

Delta has three main development streams; battery systems, its ‘catalytic generator’ range extender and platform master control. Each is approached with the same robust but lightweight process methodology, honed through decades spent in the high-pressure motorsport sector. Wrapped around these three streams is also a vehicle engineering and integration capability that has seen Delta deliver many whole vehicle projects, for start-ups and OEMs alike.

Delta’s multidisciplinary team supports a wide range of sectors and its capability covers services from initial concept through to low volume production through an ongoing investment in world-leading R&D.

itMoves is a strategy mobility consultancy created by Jose Paris, advanced vehicle designer and entrepreneur with over 15 years’ experience in mobility and advanced vehicle design. From his 98% recyclable Ford MA Concept (2001) to his single-seat AV-ready MOTIV pod introduced at MOVE 2020, Jose's work has always been focused on small footprint, innovative vehicles with a clear environmental vision.

Having spent 20 years as Technical Director to two Formula One teams from 1969-1990 Gordon Murray has a wealth of technical, design and engineering experience. At Brabham he was instrumental in two world championship wins (1981 and 1983) before three consecutive championship wins with McLaren Racing (1988, 1989 and 1990). In 1990 – after 50 Grand Prix wins – Gordon moved away from Formula One to concentrate on establishing a new company for the group, McLaren Cars Limited.

His first project there, the F1 road car, is still regarded as one of the world’s best-engineered cars. A racing version won two world sports car championships and the Le Mans 24-hour race in 1995. McLaren Cars then completed several other successful projects culminating in the Mercedes-Benz SLR McLaren.

Gordon left McLaren in 2005 to set up a Gordon Murray Design Ltd (in 2007), of which he is Chairman. The innovative British company is a world leader in automotive design, and reverses the current industry trend for sub-contracting by having a complete in-house capability for design, prototyping, and development.

In 2017, Gordon Murray Design celebrated the company’s 10-year anniversary along with that of the iStream manufacturing process at a special event, named ‘One Formula’. Gordon also marked the 25th production anniversary of the McLaren F1 road car, and his 50th year of design and engineering.

In May 2019, Professor Murray was made a Commander of the British Empire (CBE) by the Duke of Cambridge, Prince William, in recognition of his contributions to the motorsport and automotive sectors over the past 50 years.