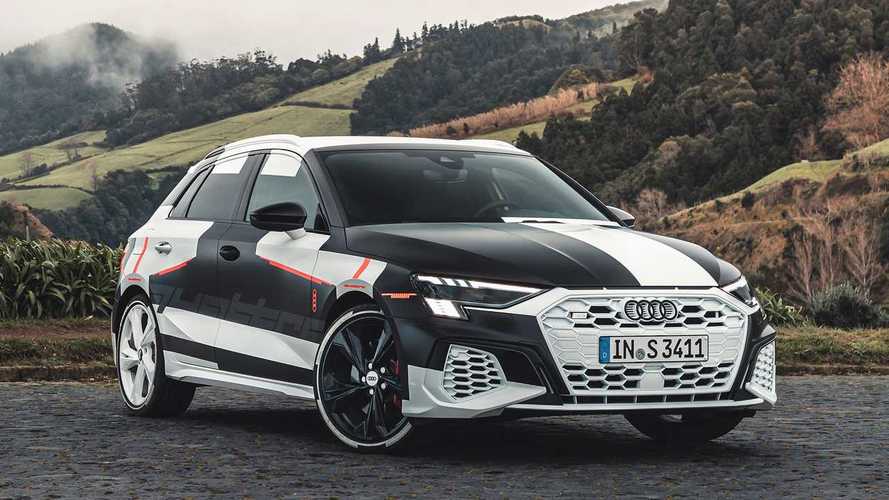 The regular A3 hasn't been revealed yet, but Audi is already giving us a first taste of the S version.

After the VW Golf 8 and Skoda Octavia 4 debuted late last year, followed at the end of January by the SEAT Leon 4, it’s almost time to meet the fanciest car of the Volkswagen Group’s compact hatchback lineup. Early March will be when the wraps are going to come off the revamped Audi A3 Sportback at the Geneva Motor Show, but we won’t have to wait until then to learn a thing or two about its hot cousin – the S3.

While the folks from Ingolstadt aren’t exactly revealing the S3 Sportback just yet, they did invite some members of the media to check out a pre-production prototype in the Azores, an autonomous region of Portugal. Some of the Motor1.com regional editions were on that list, hence this comprehensive gallery and the following preliminary technical specifications.

To no one’s surprise, the new Audi S3 Sportback will rely on a turbocharged 2.0-litre petrol engine to provide the motivation. The TFSI will be rated at 306 bhp and 295 pound-feet (400 Newton-metres) of torque, which is only 10 bhp more than the outgoing model, while torque stays the same. It’s worth pointing out we’re making this comparison with the Euro-spec S3 Sportback as the U.S.-spec S3 Saloon on sale today is slightly less powerful, at 288 bhp and 280 lb-ft (380 Nm).

Going up against newcomers such as the Mercedes-AMG A35 and BMW M135i, the overhauled S3 will have Quattro all-wheel drive like all of the other models from Audi Sport, with the exception of the tail-happy R8 V10 RWD and the RWS before it. The all-paw system will be an updated version from the one installed in the TT and will send up to 100 percent of the available power to each axle, while normally it splits it evenly.

Progressive steering is also on the menu, and this time around it’s more pronounced than before and comes with a choice between three modes: Balanced, Dynamic, and Comfort. There are also some new Bridgestone tyres developed specifically for the S3, along with 19-inch wheels in a design reserved for the performance hatchback.

Should you want to row your own gears, we’re sad to report the new Audi S3 Sportback will be offered exclusively with a dual-clutch, seven-speed automatic transmission. For some good news, there’s a newly developed damper system promising to make the ride experience more fun by improving handling and making the hot hatch feel sharper when going around the corners.

The suspension setup with MacPherson up front and multi-link at the rear will be essentially carried over from the current car. Nevertheless, Audi promises the S3 will be the “most dynamic model in the segment.” Also borrowed from the current car is the wheelbase, but the hatchback's length and width are going to increase a little bit.

The exterior design is not much of a secret seeing as how the prototype wasn’t really camouflaged. It had more of a thin body wrap with "Quattro" branding that revealed most of the production lines you’ll see once the S3 Sportback will receive its proper debut. It’s a different story regarding the interior as official images are not available at this point, although we have a few spy shots showing a reworked dashboard with an integrated infotainment system and fewer conventional buttons.

All that’s left to do is to patiently wait for Audi to introduce its fifth generation of the A3 and replace a car that has been on sale since 2012. When it debuted, the outgoing A3 served as the very first model to ride on the MQB platform, so the new one has some big shoes to fill.