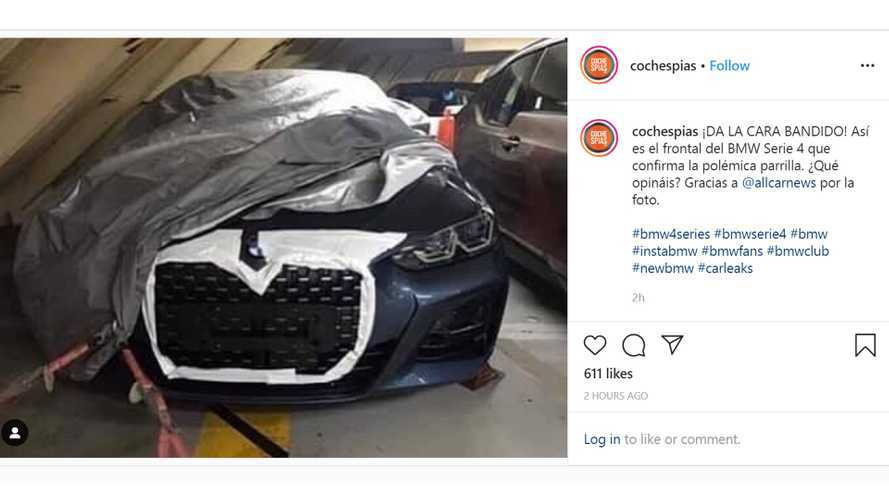 We knew this was coming. We knew even before BMW dropped an official teaser for the M4 GT3, which showed the massive grille dipping low into the darkness. The smoking gun came back in October 2019, when leaked photos showed a BMW in plain sight with the double kidney looking like a pair of exhaust vents on a small starship. In our hearts, we knew a month prior to that when BMW dropped its Concept 4 at the Frankfurt Motor Show. Yes, it was a concept, but maybe the production model wouldn’t be quite so, nosy?

If you were still among those holding out hope, we suspect things just got a bit worse for you. The above Instagram post comes from Cochespias and yes, the grille is massive. If there’s any comfort to be had here, from this angle it doesn’t look quite as gargantuan as what we saw on the Concept 4. Nor does it appear to be as chunky as what we saw in the aforementioned leaked photo. Another 4 Series leak from Instagrammer wilcoblok shows a calmer backside, and that could be the choice perspective for most people when the car debuts later this year.

For those starting to get comfortable with the big kidney, look closely at the grille and you'll see this leaked photo shows a car with a front-mount number plate frame. Yes, it's smack-dab in the centre and as such, we couldn't resist some Photoshop tomfoolery to see just how this might look for folks where a front plate is required. No need to thank us for this public service. Your friendly comments on BMW's decisions as-of late are thanks enough.

There could be more bad news for Bimmer fans who decidedly hate this new design direction. While there hasn’t been a smoking gun moment for the new M3’s fate, we can’t rule out a similar look for the granddaddy of all sports saloons. This new leaked photo puts that further into question, since the grille design for this 4 Series is decidedly different from what we saw in the previous leak. Was that older car actually the new M3, or is it the M4?

In any case, there’s certainly all kinds of controversy surrounding BMW’s choice to go bonkers with its grille. We’ll learn the M3’s fate later this year when it’s finally revealed as a 2021 model.