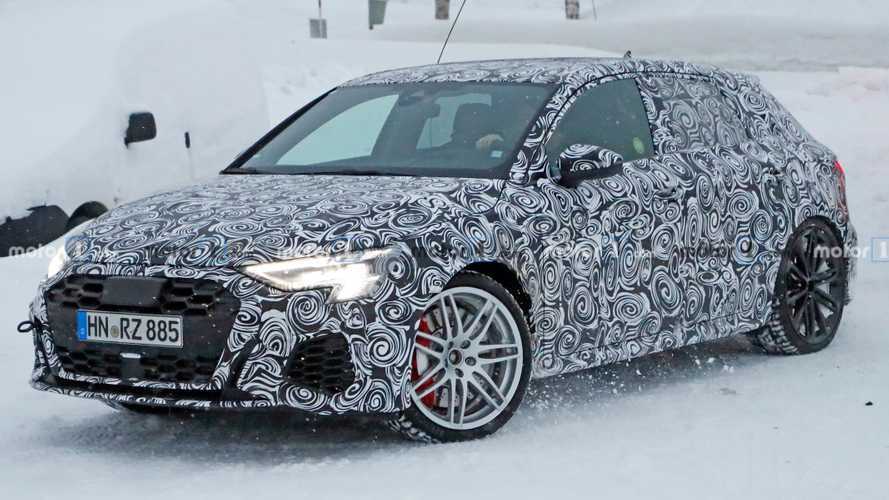 The turbocharged five-cylinder engine should make over 400 bhp.

Audi is preparing to update the entire A3 lineup, including the S3 and even hotter RS3. Camouflaged test prototypes have been spotted for months – along with a few leaks – and a new batch of photos show the RS3 still undergoing testing and development. The latest photos come from somewhere north of the Nürburgring – where we’ve spotted the RS3 before – for some winter testing.

When the new RS3 arrives, it’ll sport wider fender wings and an aggressive front bumper to announce its performance prowess. There is a new headlight design, larger grille, and redesigned air intakes pushed to the lower corners. The same is true at the rear where the RS3 will have new taillights, a redesigned bumper, and a new spoiler.

The RS3 will use the same updated interior that’ll debut on the A3. The RS3 will receive the latest version of Audi’s MMI, too. The infotainment display that once sat on top of the dashboard is now integrated right into it, creating a much more upscale look inside. It’s still unclear if Audi will put a second screen below the main display for HVAC controls though there are traditional switches, which flank a large area of blackness that could be another screen.

Powering the RS3 will be Audi’s turbocharged 2.5-litre five-cylinder engine found in the current car. It makes 394 bhp (293 kilowatts), though the engine should receive a small power bump in the new model, possibly developing over 400 bhp (298 kW).

While we’ll have to wait to see the RS3 in all its glory, we should have a good understanding of its design and features this March. That’s when the new Audi A3 will debut at the Geneva Motor Show. The S3 could debut there, too; however, the RS3 will likely arrive closer to the end of this year.