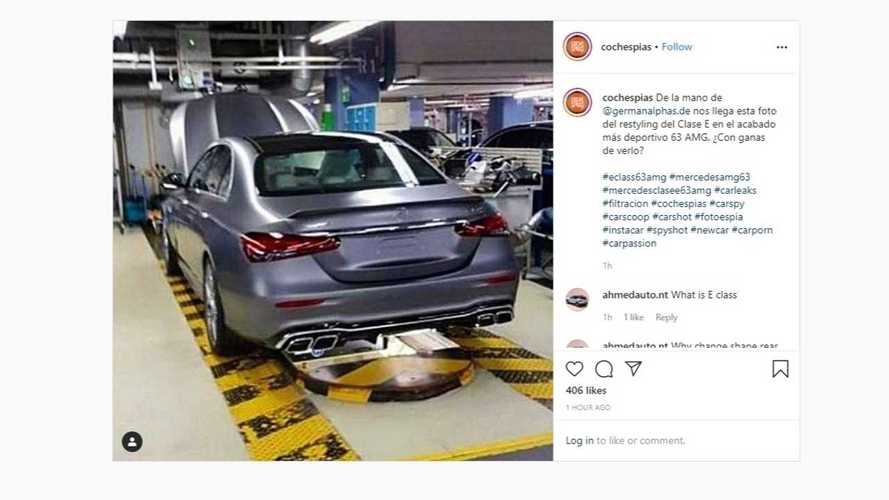 The quad exhausts also appear to be slightly different.

It’s becoming somewhat of a pattern to see spy shots of unreleased models straight from the factory where they’re built. Recent examples that spring to mind include the VW Golf GTI, BMW M3 G80, and the upcoming 4 Series Coupe. Today, an image of the yet-to-be-released Mercedes-AMG E63 facelift has “escaped” onto the Internet, specifically on the Instagram account “cochespias.”

The whereabouts of the image are shrouded in mystery, but one could speculate it was taken in Germany at the Sindelfingen factory where the production of the W213 takes place. It’s also the factory where Mercedes makes the CLS and all three body styles of the S-Class, along with the Maybach S-Class, and the AMG GT, but I digress.

We get to see the derrière of the high-performance saloon in full, without any of that annoying camouflage blocking the view. Pointing the obvious, the taillights are completely new and have a horizontal arrangement rather than the vertical layout of the current pre-facelift model. The revamped lights extend onto the boot lid to give the sensation of a wider rear end and bring the AMG E63 in line with other recent Mercedes saloons that have these more imposing taillights.

It goes without saying the regular E-Class will feature the new taillights, along with that chrome bar extending over the entire width of the boot lid. The current E has that as well, but on the facelifted model, it will connect with the section of the taillights housed by the boot lid. The E63-reserved rear spoiler appears to have a black finish to go along with the dark roof, while the diffuser has more metallic accents than we’d like.

As far as the quad exhaust system is concerned, the tips appear to be slightly different in the sense that each tip has its individual housing rather than the pair of tips on each side of the rear bumper sharing just one housing. The low resolution of the image doesn’t allow us to figure out whether it’s the standard E63 or the hotter E63 S, although we’re tempted to believe it’s the latter.

We can’t see what’s going on at the front, but logic tells us the E63 models will finally get the Panamericana grille with vertical slats. After all, even the A45 has it now, so it would make sense for the far more expensive E63s to get the same setup shared with lots of other range-topping Affalterbach models. New CLS-esque headlights already previewed by the three-pointed star this week are also on the menu.

With Mercedes announcing the regular E-Class facelift will reach European dealers this summer, chances are the E53 and E63 AMGs will be revealed before the year’s end or early 2021.