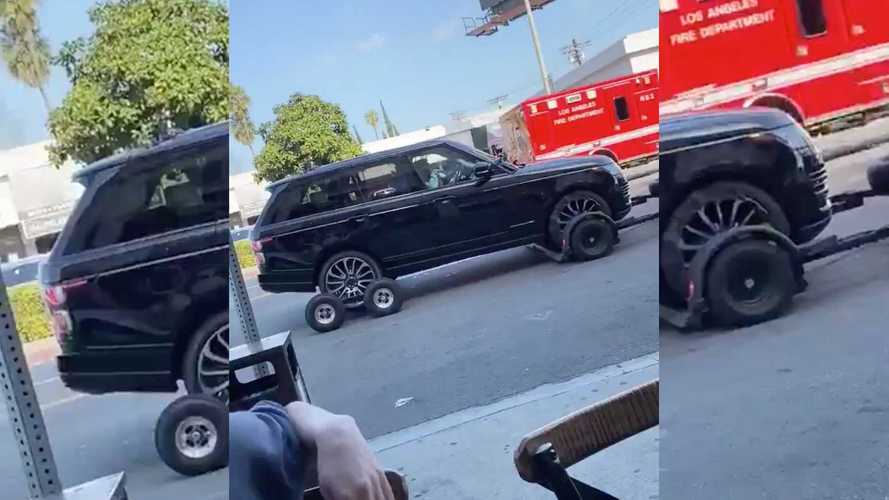 Everything is a lie, and nothing is real.

Movie magic has deceived audiences for over a century. Camera tricks, special and visual effects, and other Hollywood wizardry can make the unreal feel tangible. That level of deception ranges from the biggest blockbusters to late-night TV shows like "The Late Late Show with James Corden" and its "Carpool Karaoke" segments. A video posted on Twitter shows the Carpool Karaoke production crew rolling through Los Angeles, and Corden isn’t driving, thankfully.

The video, albeit brief, shows Corden behind the wheel with the person taking the video saying Corden is with Justin Bieber, filming an episode of "Carpool Karaoke." All four tyres of the Land Rover Range Rover are off the ground with the front wheels on a small trailer and the rear tyres on dollies. The bonnet and windscreen are covered in cameras and other gadgetry. The truck pulling Corden looks straight off the lot of a Hollywood movie studio.

The behind-the-scenes reveal is interesting, though far from shocking. Even though the finished product appears to show Corden driving during the segments, there are a few cracks in the veneer that hinted Corden didn’t drive. Exterior shots are kept to a minimum, and even then, they’re often of the rear end, hiding the passengers inside. Nothing is real.

Considering the on-screen antics Corden and his guests get into during an episode, it’s not all that surprising he’s being towed through L.A. and not driving. While celebrities navigate the streets of L.A. every day, it’s still a risk for the studio, and everyone else involved in the production, to have Corden at the wheel if something were to go wrong.

Why would audiences want Corden focused on driving when the best part is his interactions with guests? Let him focus on that. Does this peek behind the curtain ruin the magic of "Carpool Karaoke?" Maybe for some. It peels back a layer to reveal a bit more structure to an otherwise spontaneous show.