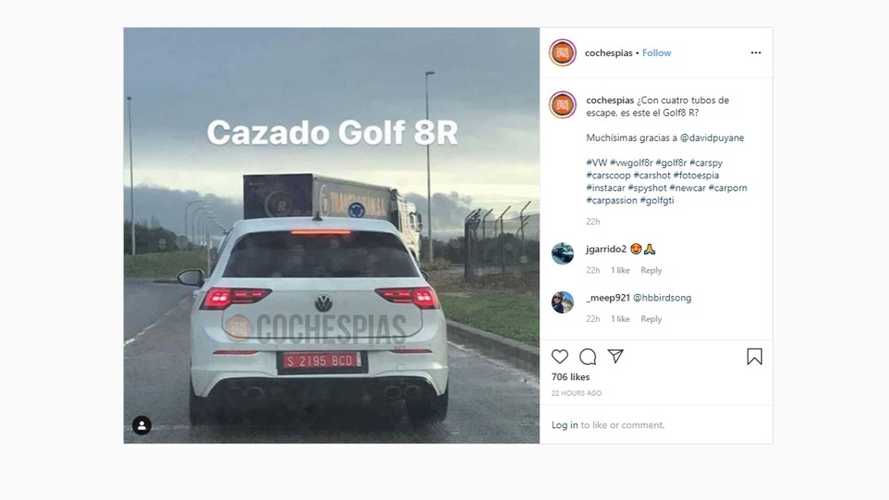 Like all hot Golfs before it, the new R looks quite understated.

When Volkswagen introduced the eighth generation of its immensely popular Golf in the second half of October 2019, it made a big announcement on the very same day. It revealed plans to introduce not one, not two, not three, but four separate performance versions of its compact hatchback in 2020. That’s right – the GTI, GTI TCR, GTD, and the R are all coming later this year. The Grand Tourer Injection has already been confirmed to debut in March at the Geneva Motor Show, but today, we’re here to talk about the all-paw hot hatch.

Rumoured to premiere in September, the new Golf R has likely been spied judging by the adjacent image showing Wolfsburg’s latest and greatest hatchback flaunting a quad exhaust system. Published by cochespias on Instagram, the image was taken in Spain, specifically near the Applus IDIADA proving ground near Barcelona.

There’s not much to see beyond the menacing exhaust system as we’re dealing with a prototype that probably didn’t have all of the production bits. For example, the new R logo is missing. That said, the R – and GTI for that matter – have always had an understated look, and we’re not expecting a radical change for the Golf Mk 8. Don’t let the subdued appearance trick you into believing it’s just another Golf as a leaked VW slideshow revealed it will pack 245 kilowatts, so a massive 329 horsepower. If that output turns out to be legit, we’re looking at a healthy boost of 33 bhp over the previous Euro-spec Golf R. There might be an even hotter Golf R Plus down the line, with reports indicating it will unlock nearly 400 horses. We’ll believe it when we’ll see it.

We had high hopes the 2015 Golf R400 concept would receive production, especially after seeing spy shots and hearing it would get 420 bhp for an ultimate R420 version, but it never happened. We’re keeping our fingers crossed a hotter Golf R will happen this time around, unless VW is concerned it would step on the Audi RS3’s toes.