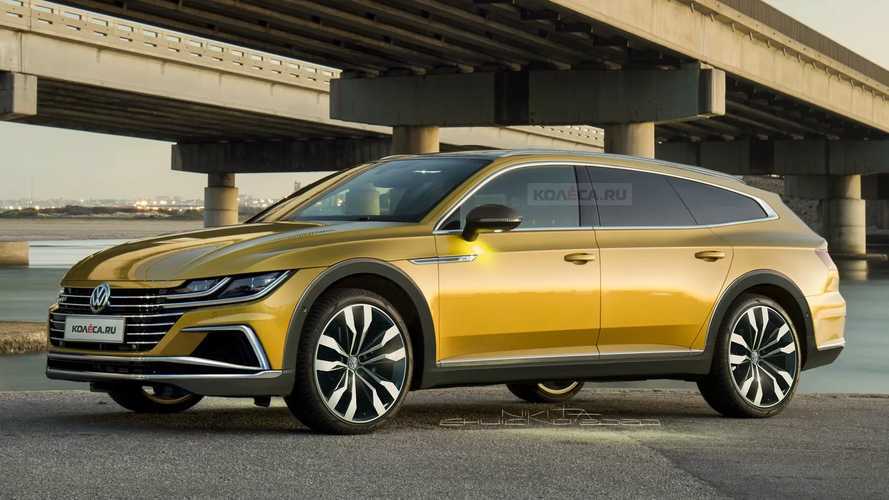 The estate could be available in China soon.

Spy shots tell us that an estate variant of the Volkswagen Arteon is on the way to China and possibly other regions, too. The folks at Kolesa have a fresh rendering to provide an idea of what the long-roof model might look like.

The front end is identical to the existing Arteon, and the changes really begin at the B-pillar. Kolesa's rendering gives the estate a downward sloping roof that keeps the vehicle from looking too boxy. Subtle, chrome roof rails add a little flashiness to the shape. At the back, the car has a somewhat sporty appearance due to a roof-mounted spoiler and second, tinier spoiler, on the edge of the deck below the rear window. The rendering matches up closely with the leaked images of the Chinese model (below).

VW reports that it intends to begin building a new long-roof model at its Emden factory in Germany in late 2021. The company isn't identifying the vehicle, but the speculation points to the model being the Arteon estate.

Volkswagen is also reportedly working on a new 3.0-litre turbocharged VR6 engine that would make 404 bhp (301 kilowatts). It would allegedly be available in the upcoming Arteon R and come exclusively with all-wheel drive. There's no info yet about whether this potent powertrain would be available in the estate or if it would be exclusive to the saloon.