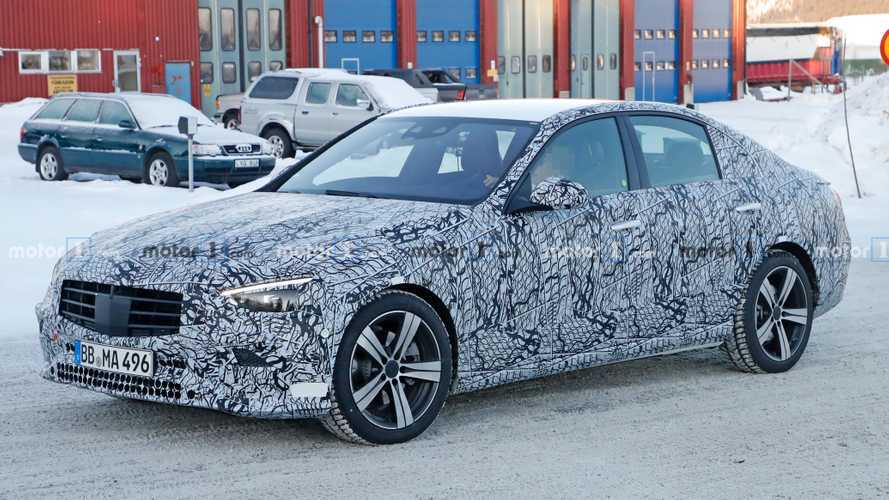 There’s a bit of the S-Class in the design.

It feels like Mercedes is working double-time on keeping its lineup feeling fresh amid growing competition. The German automaker is introducing all-new models while revising the staples for future success. One model that’s important to the brand is the C-Class, which will receive a substantial overhaul for the 2021 model year as the venerable luxury saloon begins a new generation.

The new spy photos show the test prototype with less camouflage than before, giving us a small peek at its design. We can see Mercedes’ Panamericana grille along with other styling choices also found on the upcoming S-Class. There’s not much new we can see at the rear, though the horizontal LED taillights do peek through. Either way, don’t expect the next-generation C-Class to usher in a radically new design language for the brand. However, while the design may be familiar to customers, it’s all-new underneath the sheet metal.

The 2021 C-Class will ride on a modified version of Mercedes’ MRA2 platform, the second generation of the company’s rear-wheel-drive architecture. The new underpinnings will allow Mercedes to keep the car its current size while increasing passenger space. The new platform will also enable Mercedes to fit the necessary hybrid and plug-in hybrid components without eating up too much space inside.

As with previous C-Classes, Mercedes will offer a plethora of powertrain choices ranging from four to six cylinders. There’ll be some electrification, and Mercedes will trot out the hot AMG performance version at some point down the road once the regular C-Class and its variants make their debut. There could be a high-riding all-terrain version of the C-Class estate, too, which could persuade a few crossover-interested customers to the estate lifestyle.

We don’t know when Mercedes will reveal the new C-Class; however, we expect it to debut toward the end of 2020.