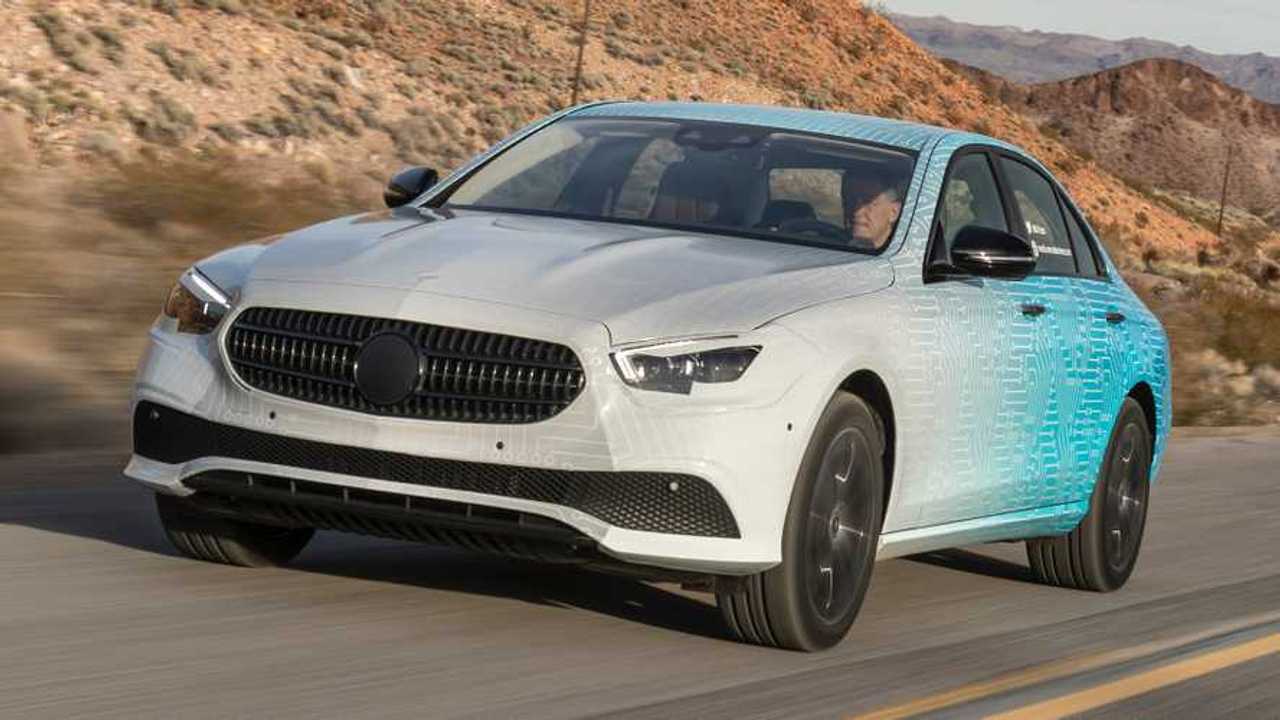 A small facelift will be joined by more tech under the skin.

The current Mercedes-Benz E-Class hit the road in 2016. Flash forward to 2020, and a refreshed version of the enduring luxury saloon is upon us. Slated to land first in European showrooms later this summer, the new E-Class gains some modest styling tweaks inside and out, along with more technology and all kinds of hybrid options. There’s just one problem – we don’t have all the information just yet.

That’s because Mercedes hasn’t officially revealed its updated E-Class. Rather, this is an official teaser with photos showing slightly camouflaged prototypes strutting in and around Las Vegas. Expect minor changes with the front and rear fascias across all E-Class derivatives, with AMG models sporting a smoother chin. The Panamericana grille could be there too, but details are still left to ponder.

Updates are also coming inside, with a new steering wheel and the MBUX system being the primary items. Digital displays are still the word, and luxury touches such as various Energising functions, an air quality indicator, and Mercedes-Benz Urban Guard through Mercedes Me will become part of the E-Class experience. Intelligent Drive will also be prevalent in the updated E-Class, with active systems for steering, braking, and steering available to handle everything from traffic jams to emergency manoeuvres.

Full details on powertrain options aren’t released just yet, but Mercedes does say no less than seven plug-in hybrid models will be part of the E-Class lineup, including 4MATIC and estate variants. Two new engines will also arrive, including a 268-bhp 2.0-litre four-cylinder mild hybrid with an integrated starter-generator. The M 256 3.0-litre inline-six making 362 bhp with its own integrated starter-generator will also be used.

As for when the facelifted E-Class will be actually revealed, Mercedes hasn’t discussed dates just yet. It will go on sale first in the European market in the summer, followed later in markets around the world.

Stuttgart/Las Vegas. With over 14 million units delivered since 1946, the E-Class is the bestselling model
series in the history of Mercedes-Benz. Many regard it as the "heart of the brand." In 2016 the E-Class took
a major step into the future: the tenth generation sets styling highlights with its pure yet emotional design and
exclusive, high-quality interior. It also impressed with its wealth of innovations, including the driver assistance
systems. This emotional and smart combination has proven extremely successful: to date more than one million
customers around the world have decided in favor of the current-generation E-Class Sedan or
E-Class Wagon. The E-Class intelligence is becoming even more exciting and dynamic: in summer 2020 the
sedan and wagon will be in the showrooms of our European sales partners as the first representatives of the
extensively facelifted model series. The long wheelbase sedan (China), coupe and cabriolet will soon follow.
Key facts:
 Next level of Intelligent Drive
o Active Distance Assist DISTRONIC with route-based speed adjustment: with the help of information
from LiveTraffic, the E-Class can recognize and respond to traffic jams and slow-moving traffic even
before the driver becomes aware of them. When a traffic jam is detected (and if the driver does not
choose a different response), DISTRONIC reduces the speed to around 62 mph as a precaution.
o Active Traffic Jam Assist: in the event of a highway traffic jam where there are lane markings, this can
substantially assist the driver with lane-keeping and maintaining a safe distance at speeds up to
around 37 mph.
o Active Steering Assist: can assist the driver in forming an emergency lane on multi-lane roads.
o Active Brake Assist with cross-traffic function: if there is a danger of a collision with oncoming traffic
when making a turn across a highway, the E-Class can brake at the speeds typical of such maneuvers.
o Active Blind Spot Assist with exit warning: this function can lower the risk of a collision with other road
users, for example passing cyclists. Active Blind Spot Assist also monitors the blind spot when at a
standstill, and can warn the driver of approaching vehicles, motorcycles or bicycles when opening the
door.
o Parking Package with 360° camera: Side View gives the Parking package a new function that keeps an
eye on the entire side of the vehicle. The extended side view makes it easier to maneuver alongside
nearby, parallel obstacles such as curbs and garage walls.
Embargoed until: January 21, 2020 at 6:01
p.m. EST (January 22, 2020, 12:01 a.m. CET)
Page 2
 Enhanced interior comfort comfort
o New steering wheel generation with touch control buttons (control by swiping a touchscreen surface)
o Large display screens as standard (2 x 10.25 inches)
o Mercedes-Benz User Experience (MBUX) with "Hey Mercedes" voice control and augmented reality
(additional information such as house numbers is shown virtually in the video image of the
surroundings on the media display, and traffic lights are also shown)
o Interior Assist (allows intuitive, natural operation of different comfort and MBUX functions by
movement recognition)
o ENERGIZING Comfort Control with ENERGIZING COACH (individual fitness recommendations based on
an intelligent algorithm, integration via wearables)
o ENERGIZING seat kinetics and Power Nap (in conjunction with 48-volt system or plug-in hybrids)
o New Air Quality Indicator function (for megacities)
o Via Mercedes me: Mercedes-Benz Urban Guard (all-around surveillance of the parked vehicle with the
following functions):
 Collision damage warning
 Tow-away protection warning
 Anti-theft warning
 Tracking function in case of theft
 Owner's ability to deactivate the vehicle key by smartphone as a preventive measure if the
key is lost or stolen
 Efficient Technology Initiative: electrification of the powertrain
o Seven plug-in hybrids, among them 4MATIC variants and wagons
o New in-line engines:
 M 254: two-liter, four-cylinder gasoline engine with ISG (Integrated Starter-Generator) and 48-
volt onboard network, rated output: 268 hp; up to additional 20 hp with EQ Boost/ISG,
aluminum crankcase, NANOSLIDE®
-coated cylinder liners, CAMTRONIC control of the intake
valves
 M 256: Beltless 6-cylinder gasoline engine with ISG and 48 volt onboard network, rated
output 362 hp; up to additional 20 hp with EQ Boost/ISG, aluminum crankcase, Nanoslide®
-
coated cylinder liners, CAMTRONIC intake valve control
*The descriptions and data in this press kit apply to the international Mercedes-Benz model range. They may vary from
country to country.