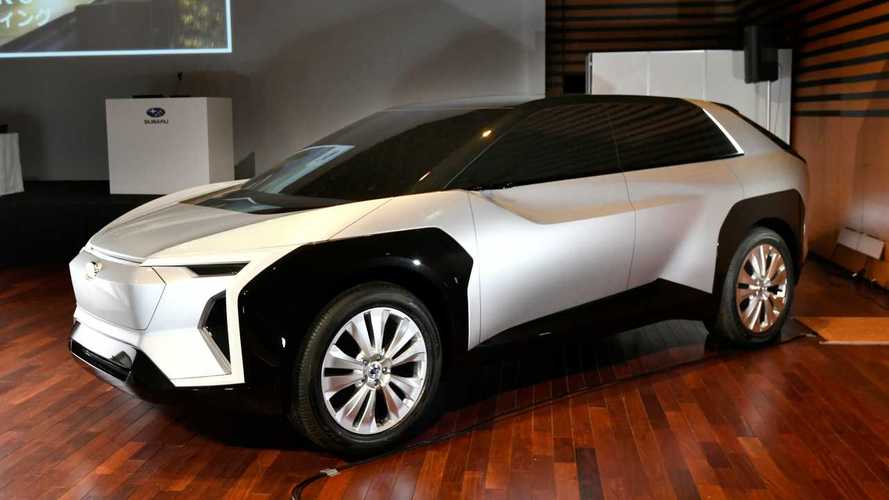 Subaru plans to sell only EVs by the mid-2030s.

Subaru unveiled a fully electric crossover concept that matches sketches teased earlier this week. The Japanese automaker showed off the angular, Tesla-like concept to a select group of the press and others as it announced its roadmap for the next decade and beyond, including a commitment to have at least 40 percent of the vehicles it sells powered by some form of electrification by 2030. A battery-electric vehicle is the goal for Subaru and others.

Subaru wants to sell only EVs by mid-2030

For now, the concept is a preview of what’s to come – old reports suggest Subaru plans to launch a fully electric crossover in 2021. It features an upright front end that lacks a grille, though the styling still evokes the brand’s current design language. A shiny black accent traces around the bottom of the body, arching over the wheel wells. The base of the windshreen is positioned close to the front, giving the crossover an enormous greenhouse. There are no images of the rear, but it likely mimics the design of the EV crossover in the sketches from earlier this week.

This electric crossover concept could also be a preview of the new platform the automaker is co-developing with Toyota. Last year, the two confirmed they’d jointly work on developing a new GT86/BRZ, along with an agreement to develop new electric vehicles, combining Toyota’s electrification technology with Subaru’s all-wheel-drive expertise to underpin the new architecture. The deal goes beyond EVs, including collaborating on autonomous and connected cars.

Right now, Subaru has a small handful of electrified models on sale globally. The road to a fully electrified lineup is still years away, and one that’ll start with a strong hybrid that’ll borrow Toyota’s technologies. Subaru’s 40-percent goal isn’t as ambitious as other automakers, though the company does plan to be selling only electric vehicles by 2035. Subaru may start its electrification process at a walk, but it appears it’ll end in a full-on sprint.