Folks, it’s time to take a flashback at Motor1.com, and with a bit of help (okay, a lot of help) from Supercar Blondie on YouTube, we’re stepping into BMW’s racing past. Sort of, anyway.

Our first flashback on this trip takes us to 2015, and admittedly, it’s where we’ll spend the vast majority of our time. You don’t have to be a BMW fan to recognise the livery on this concept car, but if you’re still unsure what it’s all about, the name says it all. This is 3.0 CSL Hommage R, so-named because it honours the 40th anniversary of the 1975 3.0 CSL which came to America wearing the same colour. It also won a lot of races, and it helped BMW establish itself in the U.S. market. 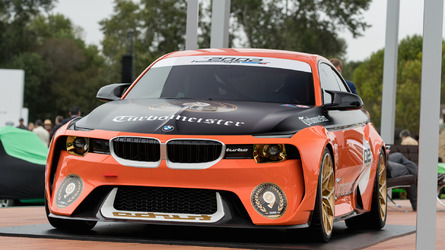 The Hommage R didn’t race, but it did come to America in 2015 when it debuted its iconic livery at Pebble Beach. Supercar Blondie’s up-close tour of the concept reminds us how well the classic colour scheme fits with the radical bodywork, and that sci-fi interior is still properly concept-esque five years later. It’s not just a rolling shell, either – staying true to form, the Hommage R has an inline-six under the bonnet that, according to the video, makes 500 horsepower. As is often the case with a Supercar Blondie video, she takes the concept for a brief drive that’s relegated to private property since it’s not road legal.

Of course, this concept car wouldn’t exist without the original 3.0 CSL, and that’s the extent of our flashback adventure. An original CSL race car as well as a road-going version make brief appearances in the clip, and both are warm reminders that 1975 wasn’t entirely a dark age for the automobile. The 3.0 CSL’s swooping lines and satisfying proportions have aged very well over the years, and yes, it’s also nice to see a BMW that doesn’t have comically large kidney grille.

Interestingly, BMW Head of Design Domagoj Dukec – who makes an appearance for the second half of the video – suggests that BMW could actually build a Hommage R if someone really wants one. By that, we suspect he means if someone is willing to pay really big money for one, but with the concept already five years old, we aren’t expecting anything like that to happen.