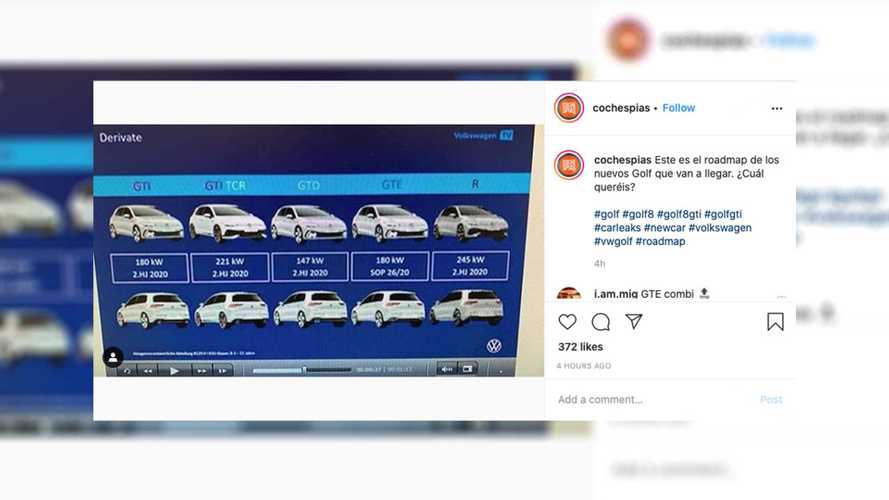 The next-generation VW Golf GTI hasn’t arrived yet, though we may now know more than Volkswagen would like. An image posted on Instagram appears to show the power outputs for a range of Golf models, including the GTI, GTI TCR, and Golf R. The GTE and GTD are also listed. The post doesn’t indicate where the image came from, but there is a Volkswagen TV logo in the upper right-hand corner of the screen.

Check out the new GTI:

If correct, then the Golf GTI will arrive with 242 bhp (180 kilowatts). That’s lower than the rumoured 255 bhp (190 kW) from an updated version of VW’s EA888 turbocharged 2.0-litre. However, it is more than the current model’s 228 bhp (170 kW). The image shows the Golf GTE making the same 242 bhp (180 kW), which debuted with the eight-generation reveal last year, adding some credibility to the other output numbers.

Next up the VW Golf performance ladder is the GTI TCR. Rumours circulating as recently as this month suggested the model would produce 286 bhp (213 kW). The image shows it making 296 bhp (221 kW). While it’s not an exact match, the difference is minor.

We won’t know until March if some of these numbers are correct. That’s when VW plans to unveil the next-generation Golf GTI at this year’s Geneva Motor Show. VW will also reveal the Golf GTD, which the image shows could make 197 bhp (146 kW). The Golf R is rumoured for a July reveal at the Goodwood Festival of Speed. The TCR could join the R in England for the event.