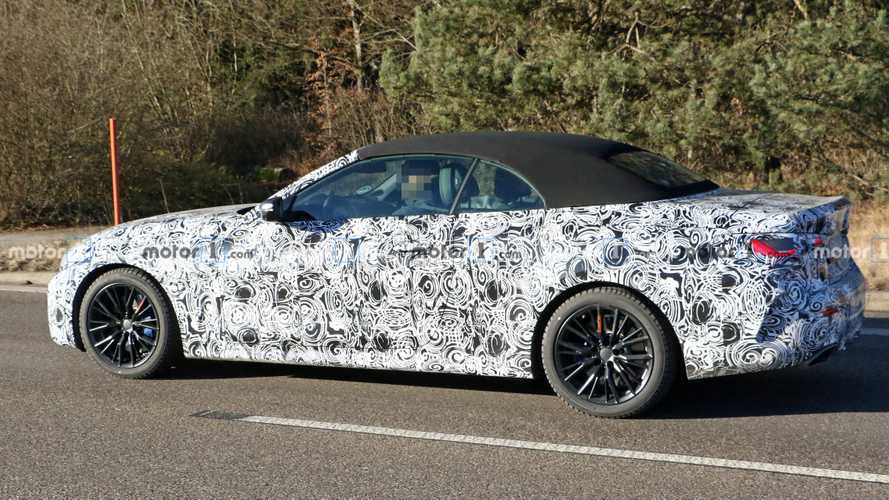 A million-dollar question: is it going to have the massive grille of the Concept 4?

Honestly, we are getting tired of seeing heavily masked prototypes of the next-generation BMW 4 Series Coupe and Convertible. However, the Bavarian company keeps hiding the 3 Series’ sportier cousins under heavy concealment, and today’s fresh batch of spy photos gives us more of the same. This is a test car for the open-top 4 Series which has been spied testing with full-body camouflage foil.

Yes, most of the heavy disguise is gone but we are still unable to take a look at the actual shape and size of the radiator grille. It is still widely believed that a massive kidney grille inspired by the Concept 4 is hiding underneath the concealment but we’ll probably have to wait until the car’s official debut to know for sure.

Unlike the current 4 Series, the new model switches to a fabric roof instead of a retracting hardtop and that’s probably good news for the purists. The change should contribute to a lower weight than the existing version and a classic convertible appearance. Expect the rear cargo space to increase because the soft top needs less space to stow.

Sharing its platform and technologies with the 3 Series, the new 4 Series, in both Coupe and Convertible forms, will mirror the engine lineup of the saloon/estate range. This means the sporty models will be offered with a wide portfolio of four- and six-cylinder turbocharged diesel and petrol motors.

There are even talks about a plug-in hybrid powertrain and it could make the 4 Series Convertible the first PHEV cabriolet in the world. Eventually, the range-topping M4 Coupe and Cabrio duo will take the flagship position with its twin-turbo 3.0-litre engine.

We expect to see the 4 Series later this year and the first to come will likely be the hardtop model, followed by the roadster a few months later.