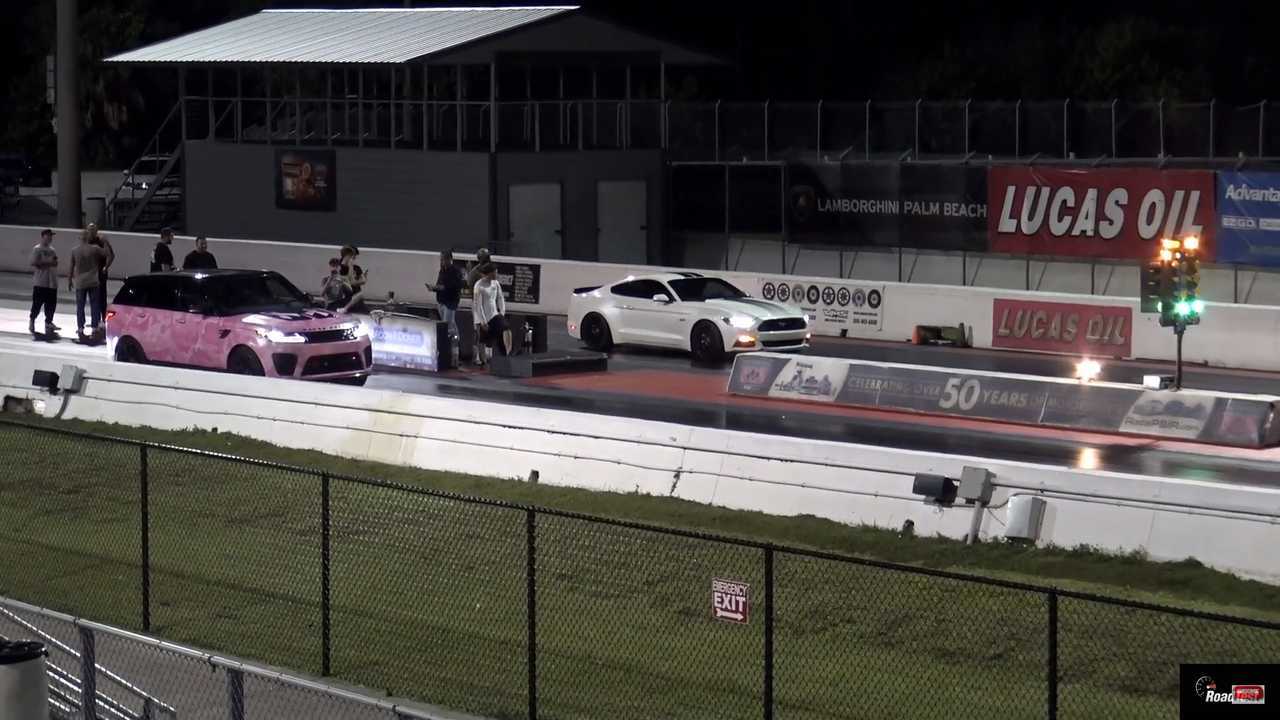 These cars are evenly matched, and we're not just saying that.

We’ve seen many drag race videos at Motor1.com. Among those have been some rather strange pairings, but this video from Road Test TV on YouTube shows us something we’ve never seen before. No, it’s not the unlikely matchup between a Ford Mustang and a Range Rover Sport SVR. Rather, it’s the outcome of their first race that has our jaws dropped, and if you think you know what’s coming, think again.

The SVR is the prizefighter in Land Rover’s lineup with its supercharged 5.0-litre V8 making 575 bhp (429 kilowatts) that goes to all four wheels. This particular Mustang wears the fascia of early S550 models from 2015 through 2017, meaning its stock 5.0-litre V8 produces 435 bhp (324 kW) for the rear tyres alone. On paper, it would seem the advantage goes to the SVR, but it’s also roughly 1,500 pounds heavier.

Such mass certainly levels the playing field, and here's where things get very interesting. The first pass down the strip proves this equality in dramatic fashion, as both vehicles run identical elapsed times and trap speeds – 13.05 seconds at 109 mph. Technically speaking, the Mustang was ever-so-slightly faster with a speed of 109.48 versus 109.13, and it was 3 thousandths quicker down the track. Still, that’s about as dead even a race as you’ll ever see at a drag strip. That's tough to do with two identical vehicles, never mind two from completely different genres.

But wait a second – the Mustang finished well ahead of the Range Rover and had a huge starting line advantage. Timing systems at drag strips are independent for each lane, and the clock doesn’t start running until the car actually moves from the starting line. The Mustang left the line over a half-second quicker than the SVR (identified in the top right photo which shows each driver's reaction time), and though it doesn’t sound like much, that actually translates to more than a car length right off the start. The Range Rover could’ve sat at the light for several minutes before punching the accelerator, and the elapsed time would still be the same. The reaction time, however, would be catastrophically bad.

That’s not the end of the story, however. These opponents face off for a second race, and this time the launch is nearly equal. Who wins the day? We’ll leave that for the video, but based on the uncanny first run, you can bet it’s most decidedly one close race.

How do Tesla Model 3, S, X really compare in terms of performance?
⠀