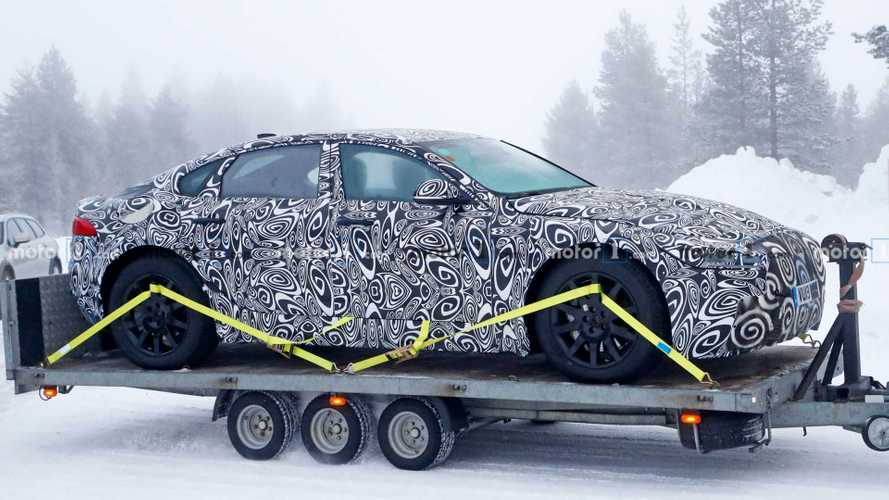 It will debut later this year.

When the Jaguar XJ retired last year, the British brand was clear that the big saloon would return in 2020, and it would be available with a fully electric powertrain. New spy shots are providing the first glimpse at this luxurious EV that debuts at some point this year.

This car uses a heavily modified Jaguar XF as a starting point, but with XJ-like elements at the front end. The engineers also install new, wider fenders/wings and different side sills.

There still aren't many official details about the new XJ. It rides on a new Modular Longitudinal Architecture (MLA) platform that can support both EV and combustion-powered drivetrains. Early reports indicate that the electric version would have a range of around 292 miles (470 kilometres). The other powertrain choices would allegedly include a petrol-fuelled six-cylinder.

Before he left the company, former design boss Ian Callum considered what the new XJ might look like. "The design has to signify the message of a sports car. It’s not just a three-box saloon. It’s something people wanna get into and drive. And that has to be a message of its shape," he said in 2018.

The Jaguar XJ won't be gone for long:

Jaguar showed off the new XJ behind closed doors to World Car of the Year jurors in 2019. Those folks also got to see the large J-Pace crossover, which also rides on the MLA platform, in addition to seeing the replacements for the XE and F-Type.

Jag is allegedly in negotiations with BMW for a multi-part powertrain partnership. If the plan happens, then the automakers would collaborate on developing electric motors, transmissions, and the necessary electronics. In addition, Jaguar might get access to the German brand's existing combustion engines.