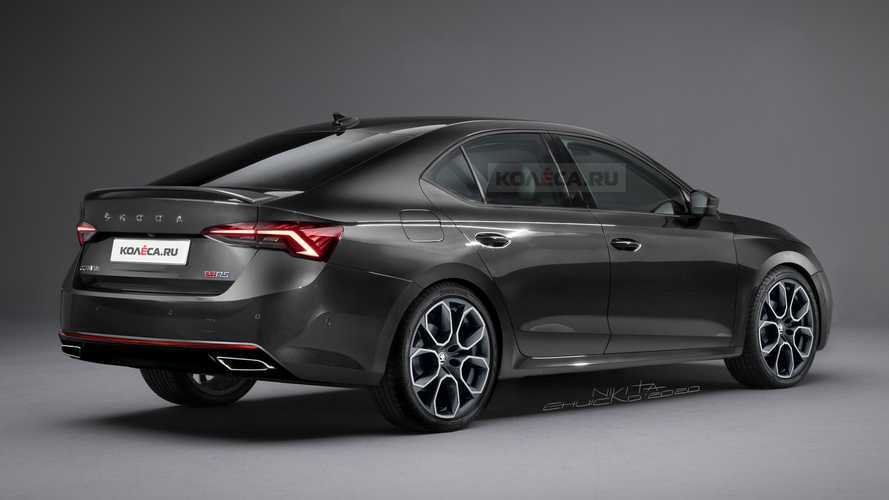 Don't be too surprised if the official images will be similar.

With the exception of the Octavia 3’s inexplicably odd facelift that brought split headlights, Skoda has been playing it safe with its designs for as long as we can remember. Yes, the Yeti was a funky little crossover/hatchback and the Roomster was a quirky MPV, but both models ceased to exist many years ago and Skoda’s lineup is now full of cars that have conventional designs.

That’s not necessarily a bad thing as the Octavia 4 has been praised for its good looks following its unveiling late last year, and it should be more appealing in the upcoming hot RS trim. Confirmed for a 2020 release, the roomier and more practical alternative to the VW Golf GTI has been speculatively rendered based on the regular model’s exterior appearance.

Our good friends over at Kolesa.ru have digitally imagined the revamped Octavia RS in a dark look with the 19-inch alloy wheels borrowed from the previous model. They blacked out the grille and modified the front bumper to accommodate the RS-specific set of LED daytime running lights originally used for the Octavia 2 RS facelift launched more than a decade ago.

At the back, the typical RS wing and dual exhaust tips denote this is the amped-up version of Skoda’s best-selling model, as does the red reflector representing a typical Octavia RS trait we’ve also seen on the Kodiaq RS. Lending the car a sportier vibe is the slightly lowered sports suspension reducing the ground clearance, while the red brake callipers and beefier air intakes are also typical traits of the go-faster Octavia.

Get up to speed with the new Octavia RS:

Skoda has always offered the Octavia RS in multiple flavours, and it’s going to be the same story with its fourth iteration. Buyers will get to pick from liftback and estate body styles, petrol and diesel engines, manual and automatic transmissions, front- and all-wheel-drive layouts, and even a plug-in hybrid powertrain for the first time. The electrified version is set to use a 1.4 TSI with an electric motor and an automatic transmission for what will probably be the priciest Octavia ever.

Expect the first versions of the 2021 Octavia RS to break cover in the months to come, with a best-case scenario being March at the Geneva Motor Show.