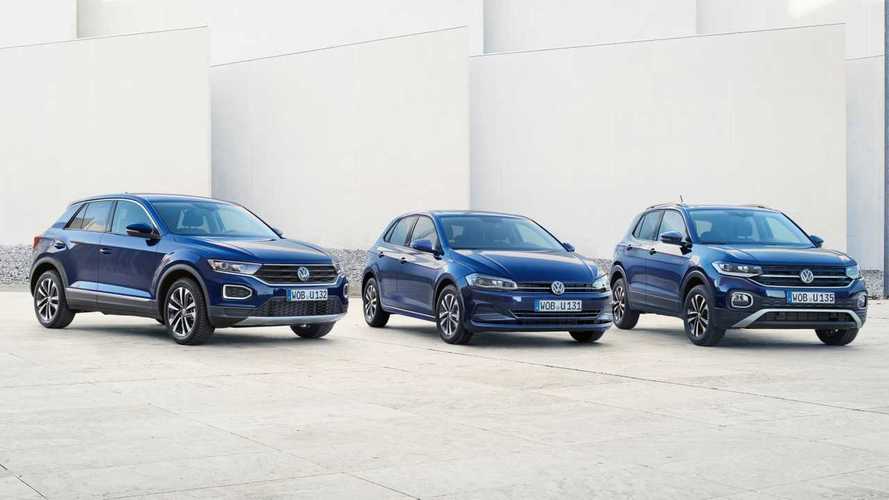 Available for a multitude of cars, including the previous-generation Golf Variant and SV.

If you know your Volkswagens, you might remember the United special edition models launched by the folks from Wolfsburg back in 2007. Those came to life to celebrate the start of Germany’s biggest indoor football contest and were available for multiple models, including some now defunct cars such as the Beetle / Beetle Cabrio. Fast forward to 2020, the “United” cars are back, and this time around, they’re marking the European Football Championship 2020 programmed to kick off June 12 in Rome with the Turkey vs. Italy opening match.

Offering customer savings of up to €3,400, the United lineup can be had for the Polo supermini, T-Cross, T-Roc, and Tiguan Allspace crossovers, as well as for the up! and its zero-emissions e-up! counterpart. VW will also sell a United version of its Touran and Sharan MPVs, while the Golf 7-based Variant and SV will also be available in this special trim. This will likely be one of the last chances to buy a MPV-esque Golf as the company has already announced the SV will not live to see another generation.

Regardless of the car you go for, all come painted in an exclusive Atlantic Blue Metallic shade and ride on burnished black Dublin alloys. Other common traits include the tinted side and rear windows along with a United badge adorning the B-pillar. Inside, there’s special fabric upholstery, leather-wrapped steering wheel, and “United” lettering on the sill panel trim. Automatic headlights and rain-sensing wipers are part of the standard equipment, as is automatic climate control for all models with the exception of the tiny up!

Prices start from as low as €14,485 for an up! United and climb about three times to €43,205 for a Sharan United. Full pricing details are available in the press release attached below. On top of these prices, VW offers a United Plus package adding goodies such as bigger wheels, a black headliner, digital instrument cluster, and inductive charging – depending on the model.

In addition, the United models can be combined with an optional R-Line Exterior package lending the cars a sportier look in the same vein as the R-Line models. Go for the Golf estate and VW will throw in a sports package, although details about what it actually contains are not available. The Touran United with the extra package comes along with sports running gear.

All cars benefit from a five-year / 50,000-kilometer warranty. No word yet on UK availability.

Volkswagen is getting into European Football Championship 2020 fever by offering new special edition models: up!, e-up!, Polo, T-Cross, Golf Variant, Golf Sportsvan, T-Roc, Tiguan Allspace, Touran and Sharan are now all available as a special edition UNITED model. Optional equipment includes the UNITED Plus package02 and the R-Line Exterior package02. Depending on the particular models, customers will also enjoy maximum savings of up to €3,40001.

The vehicle specification package is offered exclusively for the UNITED series: serious eye-catchers are the colour Atlantic Blue Metallic and Dublin alloy wheels (in burnished Black). Other exciting features include tinted side and rear windows and a UNITED badge on the B-pillar.

The interior also impresses with its unique equipment: seat fabric in the new model-specific design, sill panel trim bearing the UNITED lettering and a leather multifunction steering wheel round out the vehicle interior. Additional equipment details include (depending on the model) high-quality Infotainment and navigation systems (starting with the Polo), Climatronic air conditioning system (except in the up!), Light and Sight package (with automatic headlight control and rain sensor), as well as an extended guarantee for an additional three years or 50,000 km03.

Volkswagen offers two optional supplementary packages02: With the UNITED Plus package, additional options include (depending on the model) larger alloy wheels, a black headliner, Digital Cockpit or Premium multi-function display (starting with T-Roc) or also the Comfort mobile phone interface with inductive charging (not with all models). Depending on the model, savings for the Plus package total as much as €645. For Polo, T-Cross, T-Roc, Golf Variant and Touran, an R-Line Exterior package is also available, which includes the sporty R-Line exterior features and larger alloy wheels. For the Golf Variant, it also includes a sports package, and for the Touran, sports running gear.

All UNITED special edition models can be combined with various appealing gearbox options and are available now for order.

An overview of pricing: