Does the Lamborghini Urus look good on giant 24-inch wheels? 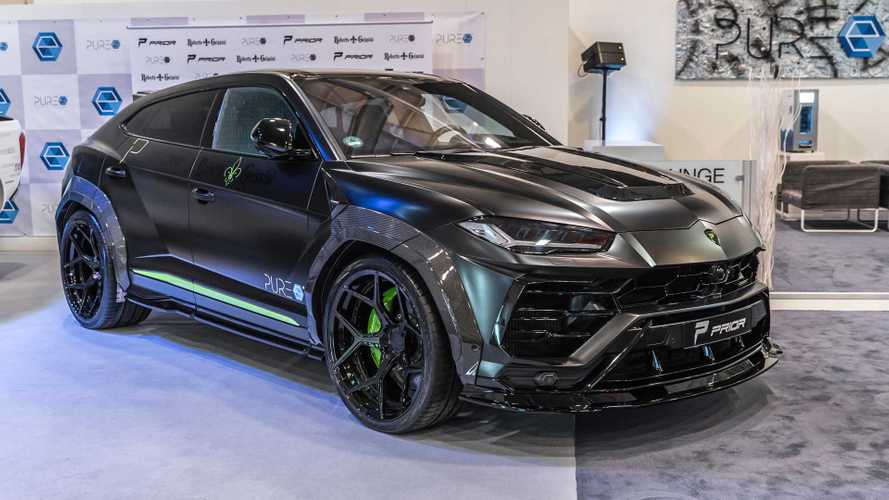 A tuner also gives it a new body kit with wider wings, a bulging bonnet, and huge diffuser.

Germany's Prior Design latest body kit gives the Lamborghini Urus a meaner look. The style might be a bit too ostentatious of an appearance for many people, but German businessman and reality television show star Robert Geiss must like it because he's the buyer of the first one.

Gallery: Lamborghini Urus by Prior Design

Prior Design's Urus body kit uses carbon fibre to fit the Urus with wider fender wings to make the crossover look even more imposing. The bonnet gains a huge power bulge. The front splitter is larger, and there's a new grille surround. Thicker side sills run between the broader fender wings. At the back, a spoiler wing attaches to the top of the roof. The diffuser gets significantly more prominent strakes than on the standard Urus.

The new body kit would make this Urus eye-catching enough – and not necessarily in a good way. However, Prior Design caps everything off by fitting a set of its 24-inch wheels. They feature Y-shaped spokes and have a gloss-black finish. A set of 285/30 tyres wrap around the ones in front and wider 335/30 rubber is at the rear.

Recent work from Prior Design:

The only mechanical tweak is a H&R lowering kit that makes the Lamborghini hunker down over the massive wheels. The stock 4.0-litre V8 with 641 bhp (478 kilowatts) and 627 pound-feet (850 Newton-metres) should offer plenty of excitement behind the wheel for Geiss.

While Prior Design's take on the Urus is sure to be polarising, Lamborghini is preparing to give the crossover its own updates. The model, which might use the Performante moniker, would reportedly gain power and have a more aggressive appearance.

PRIOR-DESIGN presented the Italian sports SUV with a full-carbon wide body kit that catches the eye yet blends harmoniously with the style of the Lamborghini at the same time.

The feather-light and characteristically shiny fiber composite material makes up not only the mighty front spoiler, ample front frame, engine hood air scoop and roof spoiler, but also the four-part body extensions on the front and rear axles, the air intake frame in the front fenders and the side skirts, which make the vehicle look even more virile over its entire length. For the tail, the PRIOR-DESIGN team developed a matching diffuser along with well-proportioned roof and tail flap spoilers under the supervision of company founder and owner Andreas Belzek.

The Roberto Geissini Urus also got a set of PRIOR-DESIGN’s very own XXL wheels: Despite their gargantuan size (24”), the PD6 forged rims look remarkably delicate. These glossy-black multipiece wheels were soled with rubber shoes measuring 285/30R24 and 335/30R24. Last but not least, a lowering module from the company H&R reduces the ground clearance of the Lamborghini and gives this high-performance SUV with a silk-matt black coat the appearance of a crouched panther ready to pounce – along with superior handling.

By the way: The Lamborghini Urus is not the only PRIOR-DESIGN project to get the Roberto Geissini treatment. There are also plans to introduce a small line of Roberto Geissini vehicles as part of the new business partnership.