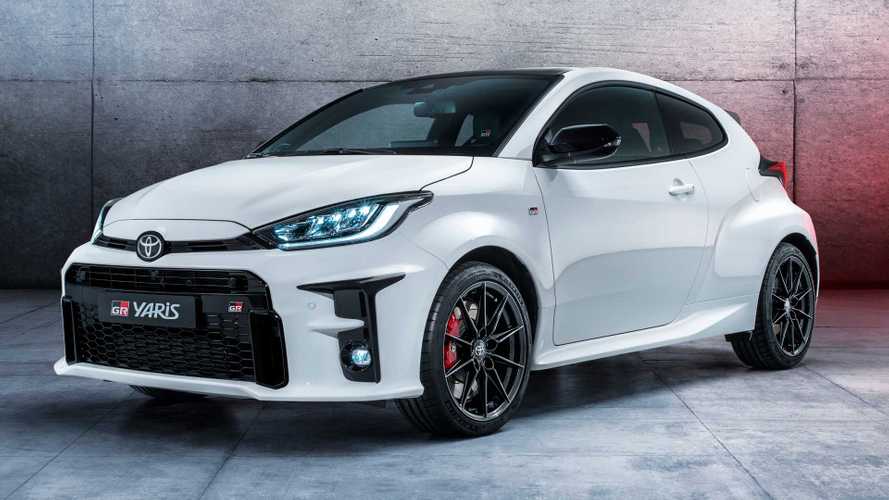 It has the world's most powerful three-cylinder engine installed in a road car.

The Yaris hasn’t exactly been the most exciting car in its segment, but Toyota changed our opinion about the supermini when it unveiled the supercharged GRMN back in 2017. A new generation of the subcompact hatchback debuted several months ago and it’s already getting the high-performance treatment courtesy of a GR version positioned below a very possible GRMN variant Toyota has already hinted at.

The pocket rocket is basically everything you’d want from a fun little car – lots of power, a manual gearbox, and all-wheel drive. With 257 bhp on tap, the GR Yaris is equipped with the world’s most powerful three-cylinder engine installed in a road car. The turbocharged 1.6-litre mill is an all-new development and offers a massive peak torque of 360 Newton-metres (266 pound-feet) transferred to both axles through a six-speed stick shift.

Despite the addition of AWD as well as two Torsen limited-slip differentials, the GR Yaris weighs only 1,280 kilograms (2,822 pounds) and promises to offer a thrilling experience behind the wheel. It does the 0 to 62 mph (100 km/h) in less than five and a half seconds and will top out at an electronically capped 143 mph (230 km/h).

Introduced at the Tokyo Auto Salon, the feisty hatch takes advantage of Toyota’s WRC expertise and comes in a three-door form making use of carbon fiber polymer and aluminium to keep the weight low. There’s a newly developed double-wishbone rear suspension, a MacPherson strut front suspension, and a wider rear track compared to the regular Yaris. The roofline has been lowered by 91 millimetres (3.6 inches) to obtain a coupe-like silhouette, and there are frameless doors along with 18-inch alloys serving as telltale signs this isn’t an ordinary Yaris.

Get up to speed with the all-new Yaris:

Drivers will get to play with a 4WD dial switch allowing them to pick between Normal, Sport, and Track modes. In Normal, front and rear torque distribution is split 60:40, while in Sport it changes to 30:70. Head to the circuit and turn on Track mode and torque will be split evenly between the two axles. It’s worth mentioning these represent the default settings as the 4WD system is automatically adjustable and can send the full torque to the front or rear wheels depending on the road conditions and the driver’s inputs.

Just so you understand how special the GR Yaris is, Toyota will build the car at its new Motomachi factory where there’s a special assembly line dedicated to GR cars. At home in Japan, there will be a First Edition priced at the equivalent of about £27,685 (using the current exchange rate) with several matte black body accents, while the £31,880 High-Performance First Edition will add BBS forged aluminium wheels and a richer equipment list.

As a final note, we should point out that while the European version is rated at 257 bhp, the JDM-spec car is slightly more powerful, at 268 bhp.

THE NEW TOYOTA GR YARIS: FORGED IN THE HEAT OF WORLD RALLY COMPETITION

The new GR Yaris is a pure performance car, born from Toyota’s title-winning experience in the World Rally Championship (WRC). Forged from success in the heat of competition, it brings motorsport technology and design directly to the world of the road car, true to Toyota Gazoo Racing’s ethos of making ever-better cars that are intrinsically rewarding and fun to drive.

Positioned at the top of the all-new Yaris range, the GR Yaris is a unique model that benefits from the design and engineering skills of Toyota Gazoo Racing and Tommi Mäkinen Racing, Toyota’s partner in the WRC. As well as serving as the official homologation model for development of the next Yaris WRC car, it also has all the attributes required for owners looking to compete successfully in local rally competitions. Scheduled for launch in the second half of 2020, it will follow the GR Supra as Toyota’s second global GR model.

Presenting the GR Yaris at the 2020 Tokyo Auto Salon, Gazoo Racing President Shigeki Tomoyama said: “One of Toyota Gazoo Racing’s commitments is to use motorsport to refine its knowhow and its personnel, with the aim of launching world-class production sports cars. While the new GR Supra is a sports car developed through track racing, the GR Yaris has been devised through our participation in rallies – something that many of our fans have been waiting for.”

Every aspect of the car has a performance focus: an all-new platform and engine, new suspension, lightweight construction, aerodynamic styling and a new GR-Four permanent all-wheel drive system. With high power and low weight, it has all the credentials for competition success, and for delivering exhilarating performance as a super-hot hatch for the road.

The new GR Yaris is Toyota’s first genuine all-wheel drive sports car and its first homologation model for World Rally Championship competition since the end of production of the Celica GT-Four in 1999.

Across two generations and three models, the Celica GT-Four featured in Toyota’s most successful WRC campaigns, a golden age of rallying that brought the company 30 rally victories, four drivers’ championship titles and one manufacturers’ championship. In a reference to its illustrious predecessor and its all-wheel drive technology, the GR Yaris features a GR-Four logo on its tailgate.

The WRC-skilled team of designers and engineers at Tommi Mäkinen Racing focused on perfecting the aerodynamics, weight distribution and light weight of the new car – the three qualities essential to achieving the best performance and drivability.

A lower roofline improved the car’s ability to cut through the air, while positioning the new 1.6 turbo engine further back towards the centre of the car and locating the battery in the boot helped produce a better chassis balance for improved handling, stability and responsiveness.

The three-door body shell is made from lightweight materials including carbon fibre polymer and aluminium, to deliver an impressive power-to-weight ratio, while the new platform allows for a wider rear track and new double wishbone rear suspension system. The team also devised reinforcements beneath the side members to ensure the suspension’s performance potential can be realised.

To ensure the plans worked in practice, the GR Yaris was put to the test by professional race and rally drivers during the development programme.

Although the new GR Yaris sits at the top of the all-new Yaris range, it has a unique design with a three-door body and a roof lowered by 91mm, creating a coupe silhouette. Frameless doors add to the coupe look. At the front the grille design and spoiler express the car’s authentic GR status, while at the rear the wide tread and muscular wings accommodate 18-inch alloy wheels.

The GR Yaris’s engine is an all-new, three-cylinder turbocharged unit that benefits from motorsport technologies to maximise performance, including multi-oil jet piston cooling, large-diameter exhaust valves and a part-machined intake port. Displacing 1,618cc, it produces a maximum 257bhp/192kW and 360Nm of torque.

Compact and lightweight, the DOHC 12-valve engine features a single-scroll ball-bearing turbo and is matched to a six-speed manual transmission, engineered to accommodate high torque levels.

Achieving a strong power-to-weight ratio was a key objective to help meet the GR Yaris’s performance targets. The body shell is constructed predominantly from lightweight materials, including a new carbon fibre polymer for the roof that can be compression moulded. Aluminium is used for the bonnet, doors and tailgate. As a result, the GR Yaris has the power of a C-segment performance hatch but the weight of a B-segment machine (kerb weight 1,280kg). Its power-to-weight ratio of only 5.0 kg per bhp helps deliver 0-62mph acceleration in less than 5.5 seconds and an electronically limited top speed of 143mph.

The GR Yaris’s performance is supported by a new GR-Four all-wheel drive system designed to optimise drive power to each wheel, while also being simple and lightweight. The distribution of torque between the front and rear axles is governed by a high-response coupling. As an option in the Circuit Pack (details below), two Torsen limited-slip differentials manage the split between the left and right-side wheels to give natural and direct car control.

The ingenious system uses slightly different gear ratios for the front and rear axles and allows for a theoretical range of front/rear torque balance from 100:0 (full front-wheel drive) to 0:100 (full rear-wheel drive). This flexibility gives a performance advantage over AWD on-demand systems that use twin-coupling or permanent AWD systems with a centre differential. The GR Four system is also considerably lighter in weight.

The driver can adjust four-wheel drive performance to suit their preference or the driving situation using a 4WD mode dial switch. In normal mode the base front/rear torque distribution is 60:40; in Sport mode the balance shifts to the rear, with 30:70 distribution to achieve a fun-to-drive quality on winding roads and circuits; and in Track mode the base setting is 50:50 for fast, competitive driving on circuits or special stages. In each mode, the torque balance will automatically adjust in response to the driver’s inputs, vehicle behaviour and road or track conditions.

The GR Yaris has a new, dedicated platform that combines the front end of Toyota’s GA-B platform – debuting in the all new Yaris model in 2020 – with the rear of the GA-C platform. This allows for a new suspension design and accommodation of the GR-Four all-wheel drive system, while also contributing to the car’s excellent stability and handling.

Where the standard new Yaris uses a torsion beam rear suspension, the GR Yaris has a double wishbone set-up, with every element optimised for performance. A MacPherson strut system is used at the front.

Customers can upgrade their GR Yaris with an optional Circuit Pack. This equips the car with a Torsen limited-slip differential on both the front and rear axle, performance-tuned suspension and 18-inch forged alloy wheels with Michelin Pilot Sport 4s 225/40R18 tyres.

To help meet its performance goals for the GR Yaris, Toyota has established a new production facility at its Motomachi factory, with a line dedicated to manufacturing GR sports cars. Instead of the traditional conveyor system, the body and assembly lines comprise a number of different cells connected by automatic guided vehicles.

Production of each vehicle calls for a large number of manual processes, for which Toyota uses a specialist team. The factory design and the talents of the workforce allow for high-precision assembly of highly rigid vehicle bodies to levels that are hard to achieve on standard production lines.

With its new manufacturing methods, the GR facility is capable of handling multi-type, small-volume production, without compromising productivity.