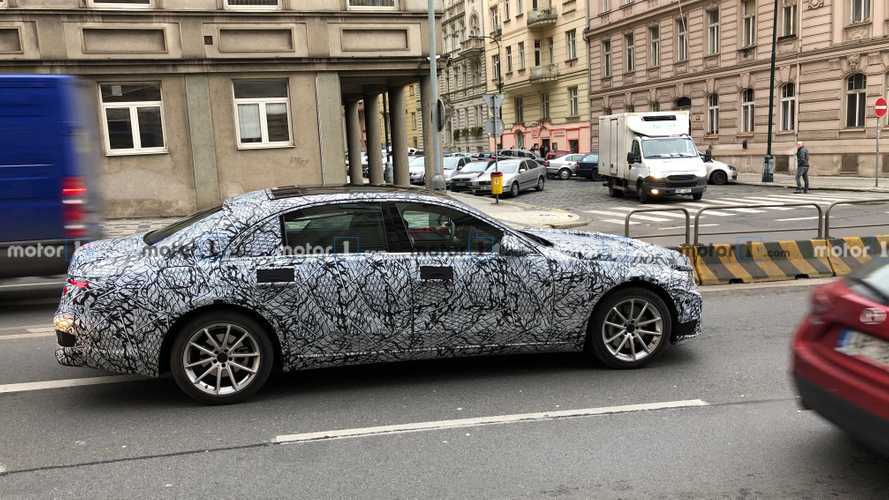 Caught in Skoda land, the W223 isn't willing to reveal its secrets just yet.

Professional spy photographers do a great job of sending us tons of images with future cars undergoing testing, but every now and then, we receive a little bonus from our audience. Case in point, a Motor1.com reader decided to shoot us an e-mail with several photos he managed to take on a busy street in Prague where he happened upon a prototype of the next-generation S-Class. Caught wearing Czech plates, the revamped Mercedes flagship appeared to have the full production body and lights.

We’re still baffled by the three-pointed star’s decision to slap on extra camouflage on the door handles, even though we’ve already seen prototypes with less disguise to reveal the nifty pop-out electrically operated handles. These aren’t exactly revolutionary seeing as how they’ve been available for many years.

The heavy camo obviously gets in the way of seeing the design changes Mercedes’ crown jewel will be going through, but we’re keeping our fingers crossed for a bit more variety. After all, the three core saloons (C, E, S) look very much alike and it’s difficult to tell which is which from some of the angles that don’t give away the vehicle’s size. The swoopy CLA and CLS saloons are also quite similar, so we’re hoping for a fresh take with the W223.

However, we’re getting the feeling Mercedes will be playing it safe with the car’s exterior by adopting a risk-free evolutionary design. The new S does seem to have a lower nose and might be a tad wider, while the rumour mill is suggesting the standard-wheelbase model won’t live to see another generation. Sharper headlights and bigger taillights extending onto the boot lid will contribute to the model’s more modern look, but we’re sure some people shopping in this segment are going to want something with a bit more pizzazz.

For that crowd, the EQS with its unconventional shape should fit the bill, but it’s probably going to be significantly more expensive than the S-Class considering it will serve as Mercedes’ flagship electric car. It might’ve been teased for a potential 2020 official reveal in production guise, although we’re not so sure sales will commence before the year’s end, with 2021 or even 2022 being a safer bet.

Meanwhile, the conventionally powered S-Class will be officially revealed in the months to come and will have a totally different interior compared to the outgoing model. You’ve probably seen the spy shots already, so the giant portrait-oriented touchscreen shouldn’t come as a surprise anymore. The massive display will replace most of the physical controls, which is becoming a trend as even mainstream cars such as the VW Golf 8 and Honda E are getting rid of most buttons and knobs. Audi has pledged to get rid of basically all traditional controls and replace them with a plethora of displays as previewed already by the screen-heavy E-Tron electric SUV when it’s equipped with side cameras.

Get up to speed with the new S:

New Mercedes S-Class to get V12 engine after all - report

Special thanks go to Dinozzo for sending us the spy shots!