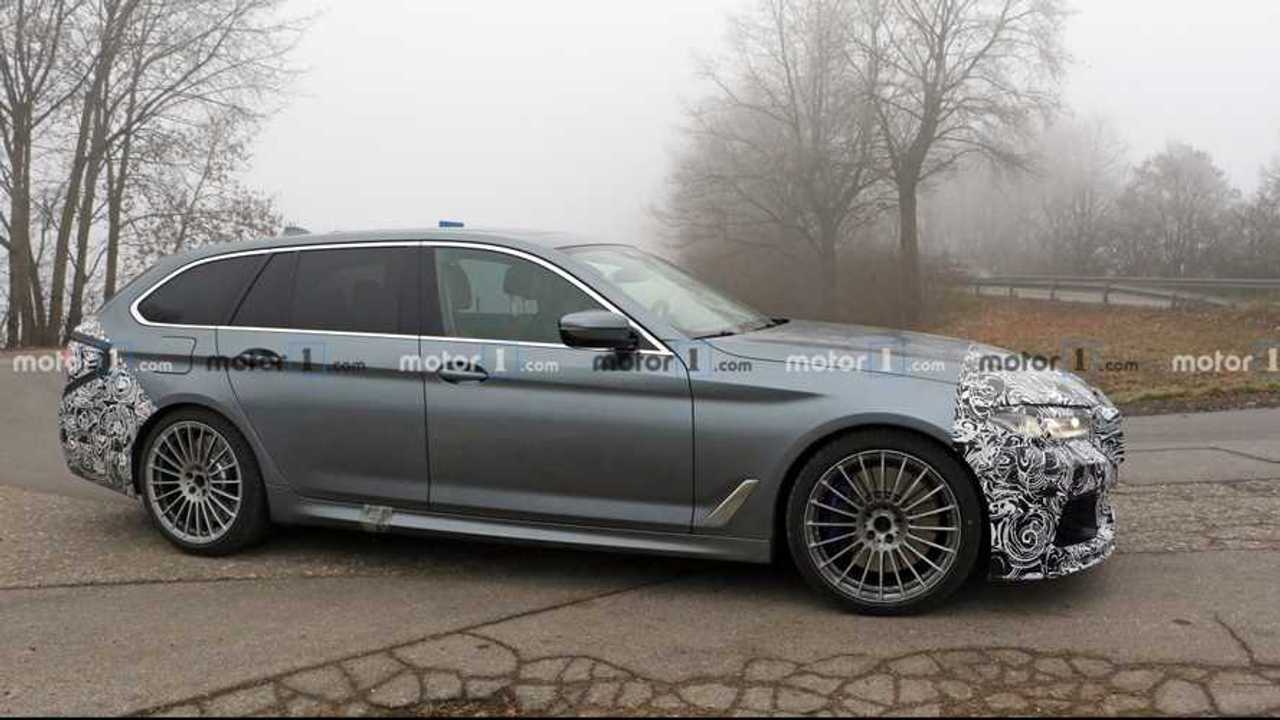 The Life Cycle Impulse for the 200-mph estate will bring new headlights and taillights.

With spy shots showing BMW is preparing to give the 5 Series family a mid-cycle update, it makes perfect sense Alpina will be doing the exact same thing to its B5 models. Spotted here in Touring flavour, the midsize premium estate tweaked by the talented engineers from Buchloe, Germany had camouflage at the front and rear to hide the novelties we’ve recently spotted on the BMW-badged 5er.

Despite the mascara, you can clearly see the headlights have a new look that will be seen first on BMW’s own 5 Series Touring. The same thing can be said about the taillights as these appear to have different graphics from what we can see peeking through the camouflage. The quad exhaust system is a telltale sign this isn’t an ordinary 520d Touring, while the eternally classy multi-spoke wheels are a typical Alpina trait.

A closer look at the front end reveals the bumper has been redesigned to accommodate larger air intakes to provide better cooling of the twin-turbo 4.4-litre V8 and lend the fast estate a meaner look in the process. If you’re not a fan of the gargantuan grille becoming more common on newer BMWs, you’ll be happy to hear the kidneys of the facelifted B5 will have a normal size.

At the back, the bumper appears to be a spitting image of what you’ll find on the current B5 Touring, but things could change between now and the model’s launch. The generous disguise applied to the estate’s derrière might tempt you to believe there will be a lot of tweaks, but we wouldn’t hold our breath.

What else is Alpina up to?

Alpina XB7 spied wearing a little camo at the Nürburgring
⠀

Positioned above the M550i, the Alpina B5 is the closest thing we’ll ever get to a new M5 Touring and is also offered in a torque-rich D5 S specification as an alternative to the soon-to-be-discontinued M550d. With 600 bhp and 800 Newton-metres (590 pound-feet) of torque, the petrol-fuelled model is the fastest production estate on sale today by hitting 200 mph (322 km/h), eclipsing even the new 190-mph (305-kph) Audi RS6 Avant.

The B5 facelift’s upcoming release will follow the launch of another crazy fast Alpina estate, the 186-mph B3 Touring introduced last fall as a substitute for the M3 Touring.