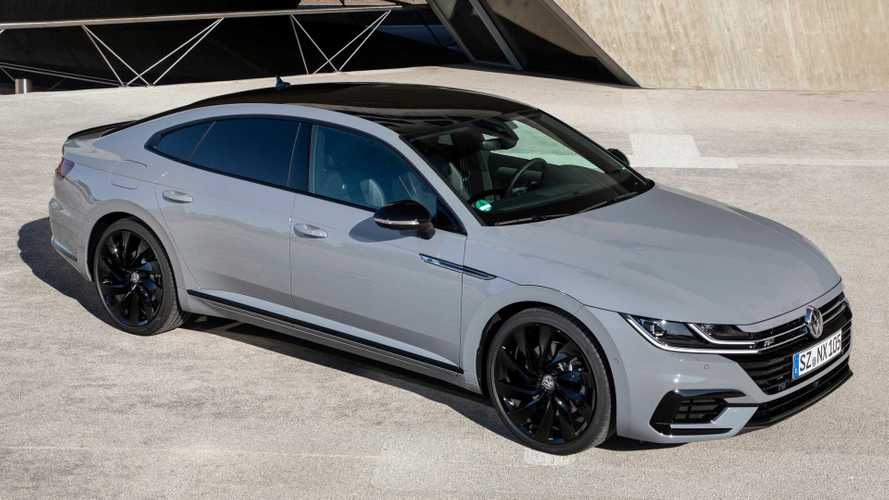 It was nearly a year ago when Volkswagen introduced a fully loaded Passat Variant R-Line Edition in Europe and now it’s coming out with a similar version for the fancier Arteon. While the generously equipped estate was limited to 2,000 cars, the stylish fastback is considerably more exclusive as the peeps from Wolfsburg are only making 250 vehicles for the European market.

Much like the mechanically related MQB-based Passat we mentioned, the Arteon R-Line Edition wears an attractive Moonstone Grey paint combined with a black roof for a two-tone look. It sits on 20-inch Rosario black alloy wheels and has tinted rear windows for a greater visual impact and extra privacy. Inside, there’s plush Nappa leather and a fully digital instrument cluster as standard equipment.

Being the top-of-the-line version, this Arteon has basically all the kit VW can cram into its more appealing Passat. Goodies include everything from front and rear heated seats to keyless access and from adaptive LED headlights to the top-spec infotainment system. Buyers are also rewarded with a ton of safety tech, including road sign detection, Park Assist, lane change assistant, adaptive cruise control, and autonomous emergency braking in the event of an imminent crash.

VW will sell the Arteon R-Line Edition exclusively with the high-end engines, specifically the 2.0 TSIs and 2.0 TDIs, including the diesel packing a pair of turbochargers and hooked up to a 4Motion all-wheel-drive system. Regardless of your choice, the engine will send power to the road through a seven-speed, dual-clutch automatic transmission.

Go for the 268-horsepower petrol model or the aforementioned 236-bhp Bi-TDI engine and VW will throw in adaptive chassis control (DCC) with configurable dampers for a plethora of settings to suit your style.

Since the Arteon R-Line Edition sits at the top of the lineup, it’s going to cost you a pretty penny. VW is already taking orders in Germany where it costs from €55,970 for the base 2.0 TSI with 188 bhp. For the sake of comparison, a 241-bhp Audi A5 S Line with Quattro and the seven-speed S Tronic is available in Deutschland from €52,800, so you’d have to really like the Arteon to take it instead of Ingolstadt’s Sportback.

Customer deliveries are scheduled to start in February. No UK market information has been released on it's availability.

A more practical Arteon could be en route:

Limited to 250 units: new Arteon R-Line Edition is the most exclusive model in the series

Volkswagen launches Arteon boasting a unique character: with the Arteon R-Line Edition, limited to 250 units, Volkswagen focuses even more on the dynamics and travel qualities of the Gran Turismo. Exclusive design features, extensive standard equipment and a selection of four powerful turbocharged engines with 140 kW/190 PS to 200 kW/272 PS characterise the special edition, which is available from EUR 55,970 (in Germany).

The Arteon R-Line Edition has a wide range of standard equipment that is not available in this combination in any other version of the series. And the expressive two-tone Moonstone Grey finish with black roof is reserved exclusively for the Arteon R-Line Edition. The exterior finish is rounded off with 20-inch Rosario alloy wheels and darkened rear windows.

The interior is perfectly matched with the exterior. It is fitted out with the Nappa leather package and can be customised in terms of colour by means of ambient lighting. As part of the standard winter package, the outer rear seats are also available with heating, in addition to the front seats. As well as its navigation function, the Discover Pro infotainment system also features Wireless App-Connect, voice control and DAB+ digital radio reception. Discover Pro and the Digital Cockpit (fully digital instruments) form a single entity similar to the Innovision Cockpit familiar from the Touareg. Thanks to the keyless locking and starting system Keyless Access, the car key can remain in the driver’s pocket.

Standard high-tech systems for perfect comfort and safety: the Area View feature complete with rear view camera provides a view of the vehicle surroundings and facilitates manoeuvring, as does Park Assist. Dynamic Road Sign Display, the lane change system Side Assist, the Autonomous Emergency Braking Front Assist and the predictive Adaptive Distance Control (ACC) increase safety in flowing traffic as well as increasing comfort and safety on lengthy journeys. With the standard Dynamic Light Assist for the LED headlamps, the driver also enjoys the comfort of a dynamic cornering light and automatic main beam control.

The engine range of the Arteon R-Line Edition clearly focuses on the sporty flair of the Gran Turismo, with the four most powerful units of the series being available for the limited special edition. They are all efficient 2.0-litre four-cylinder engines combined with a 7-speed dual-clutch gearbox (DSG). The range starts with a TSI petrol engine and a TDI turbocharged diesel, each with an output of 140 kW/90 PS010203. The all-wheel-drive top-of-the-range diesel engine offers an output of 176 kW/240 PS04, while the most powerful version is the Arteon R-Line Edition with the 2.0 TSI, providing a peak output of 200 kW/272 PS05 as well as all-wheel drive (4MOTION). The ESC system has also been adapted. As in the sporty R models, it can now be completely deactivated.

The two most powerful versions of the Arteon R-Line Edition are fitted with what is currently the highest development stage of the adaptive chassis control DCC; the latter is optionally available for the 140 kW models. The system allows the regulated dampers to be configured on a continuously variable basis from Comfort+ to Sport+ over and above the settings in the driving mode selection (Comfort, Normal, Sport, Individual). This is another reason why the limited special model stands out as a particularly dynamic business class travel vehicle. The Arteon R-Line Edition is available for order right away at a price of EUR 55,970 (for 2.0 TSI with 140 kW/190PS) and will be delivered from February 2020.