While Ford plans to build a model on the VW MEB electric vehicle platform, don't expect it to be the Mustang family.

A rumour recently suggested that Ford and Volkswagen's partnership could lead to a smaller Mustang Mach-E variant that would ride on the German brand's MEB platform for electric vehicles. However, Ford now says this isn't the case.

"There are no plans to offer an all-electric Mustang based on VW’s MEB architecture. We remain on track to offer one MEB-based fully electric car for our European customers and are considering a second vehicle. Beyond that, we don’t comment on speculation about future products," a company spokesperson told Ford Authority.

The original rumour claimed that Ford and VW representatives met in November to discuss electric vehicles, and the possibility of smaller Mach-E came up. The tentative discussions indicated this new model would have a different look than its larger sibling but remain a crossover.

Get ready for the electric Mustang crossover: 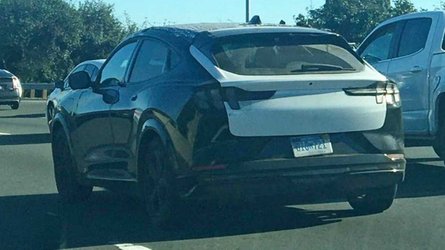 In July 2019, Ford and VW announced that the Blue Oval was buying enough MEB platform parts and components to produce 600,000 electric vehicles over six years specifically for the European market. At the time, they were also negotiating developing an EV together that would also be for Europe. The pair have already agreed to cooperate on the creation of future pickups and vans, including the next-gen VW Amarok and Ford Ranger.

The actual Mach-E arrives in late 2020, but Ford is already taking deposits for them. So far, 80 percent of customers want the extended-range, 98.8-kilowatt-hour battery, and 55 percent are asking for all-wheel drive. Power-hungry buyers can get it with as much as 459 bhp (342 kilowatts) and 612 pound-feet (830 Newton-metres).