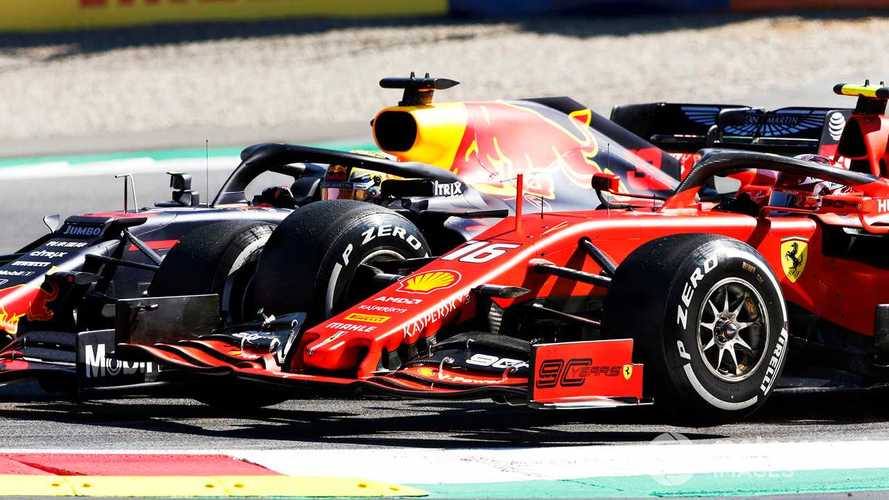 Max Verstappen says stewarding in Formula 1 is the same as refereeing in football, because personal interpretation will always play a key role in decision-making.

Verstappen was at the centre of a clear shift in policy from the FIA this season, after his aggressive last-gasp overtake on Charles Leclerc to win the Austrian Grand Prix was investigated without punishment.

At the next race in Britain, Verstappen and Leclerc went wheel-to-wheel again in another fierce fight that ended without either driver being penalised, as the governing body and its stewards began to set new precedents within the rules to allow for harder racing.

Verstappen told Motorsport.com: "The thing is, it's the same in football, isn't it? You have different refs and some give a yellow card easier than others. It's the same like that.

"Of course, you know, it's a rulebook. But then still the stewards have a little bit of a say of what you're actually going to apply.

"When you go into like a Champions League match or a Premier League match, the ref can be different.

"Sometimes you can get away with a yellow card and then the other ref gives you a red, and you're like 'What was going on?'. It's exactly the same, I think, in Formula 1."

The new racing rules policy that started to be implemented this year was at the behest of new race director Michael Masi, who replaced the late Charlie Whiting on the eve of the season.

Masi also reintroduced the black-and-white flag as a 'yellow card' warning, but this was only used once – on Leclerc for the defensive block that pushed Lewis Hamilton off-track and helped the Ferrari driver win the Italian Grand Prix.

However, towards the end of the season, some decisions were made that seemed to clash with verdicts from similar incidents, particularly those that seemed to go against the Verstappen/Leclerc verdict in Austria – which put greater emphasis on the driver on the outside to avoid a collision, not just the aggressor on the inside.

However, as there is no fixed panel of stewards in F1 – like the rotating cast of referees used in football – the influence of personal interpretation is still significant, and Verstappen said such inconsistency is "fine".

"That's also fine," he said. "When you're on the wrong side of the penalty it's always bad, unless you really did something bad and you can accept it.

"But when it's like 50/50 and you get the penalty, you're always gonna question.

"It's very hard for them [the officials]. I mean, I've been in the room [at the Marrakech Formula E round as 'community service' punishment] and experienced them handing penalties out.

"It's not easy for them. They also don't want to give penalties. Sometimes they just have to, the way the rules are written as well.

"We can maybe look into easing some of the penalties, or just write them in a different way into the rulebook."